The Real Reason China Is Desperate to Stop THAAD 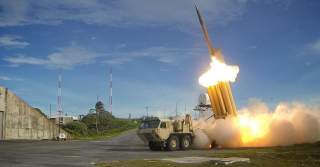 Chinese opposition to South Korea’s deployment of the THAAD missile defense system is less about missiles than about an ongoing effort to weaken—and ideally demolish—the United States’ network of formal and informal alliances in Asia that has underpinned the regional order for the last seventy years.

The THAAD controversy that heated up in 2016 once deployment became likely displays a familiar Chinese modus operandi: First, pick a fight over an allegedly offensive act. Next, follow up with vitriol and veiled threats, and then inflict economic pressure—while making bland denials or declaring it the spontaneous reaction of the righteously offended Chinese people.

This sequence played out to form in South Korea in recent months, highlighted by verbal assaults on South Korea and fierce pressure on Lotte Group’s operations inside China. (Lotte provided the land for basing THAAD batteries in ROK.) Other strong-arm tactics include restricting Chinese tourism to South Korea and blocking online trade in South Korean goods.

In addition to domestic disruption caused by Chinese hectoring and economic sanctions, in South Korea and other targeted countries, opposition voices are energized, claiming the U.S. relationship isn’t worth the economic or security “costs” of offending the PRC. And even if the alliance with the United States remains intact, it is at least shaken and may face self-imposed constraints in the future over worries about Chinese reactions. All in all, a “win-win” for the PRC.

A similar scenario played out with the Philippines in 2012 after then-president Aquino got too close to the United States, deepening defense ties and authorizing an expanded U.S. military presence in the Philippines. The PRC picked a fight over the Scarborough Shoals—well within the Philippine EEZ—bamboozling the Americans with a promise (unkept) to withdraw its ships once the Philippine Navy departed the area. Then it made threats, and applied economic pressure by blocking Philippine banana imports, with the promise of more hardships to come.

This worked well, helped along by the United States’ supine responses to the Scarborough Shoal takeover and the later Permanent Court of Arbitration ruling against Chinese behavior in the South China Sea. This raised doubt in local minds about America’s commitment under the U.S.-Philippine Defense Treaty. And once Rodrigo Duterte—already ill disposed towards the United States—became president, relations with the United States soured further. The U.S.-Philippine alliance is not finished, of course, but it has been jolted.

PRC efforts against the Japan-U.S. alliance started in earnest in 2012 over the Japanese government’s alleged “nationalization” of the Senkakus. A barrage of invective was followed by increasingly frequent and sizable intrusions into Japanese waters by Chinese fishing boats and other government vessels, with the PLA Navy over the horizon. The PRC also banned the export of vital rare-earth metals to Japan, claiming there were only enough for Chinese customers. “Spontaneous” protests against Japan broke out in China, to include attacks on Japanese-owned businesses, and even driving Japanese cars was risky for a time.

All this raised doubts in Japan over the U.S. commitment, in addition to creating worries on the U.S. side about being dragged into a war on Japan’s behalf “over some rocks” (the Senkakus).

Chinese efforts to pressure Japan continue to this day, but have had the unintended effect of motivating Japan to strengthen its defenses and hardened public attitudes towards China. And PRC pressure has even prompted two U.S. presidents to publicly reaffirm America’s willingness to defend Japan and its disputed territory.

As some observers note, the PRC is better at tactics than strategy—and even its tactics don’t always work. Indeed, the South Koreans have not yet backed down over THAAD, and even a leading “leftist” presidential candidate sounds less opposed to the missile-defense system than he did a couple months ago. The PRC is nonetheless persistent.

Other U.S. Alliances in the Crosshairs

Among ASEAN nations, Singapore is particularly supportive of the U.S. military presence in East Asia and provides valuable support to U.S. forces operating in the region. Last November, Hong Kong authorities seized a shipment of Singapore Armed Forces (SAF) armored vehicles en route back to Singapore from military training in Taiwan. This was accompanied by implicit Chinese threats that Singapore would suffer economically if it is too pro-American and too assertive in challenging PRC actions in the South China Sea. The armored vehicles were released after a suitable period of humiliation, as part of a thinly disguised effort to upset the Singapore-U.S. relationship.

Even the Australia-U.S. alliance is in China’s sights. The PRC is making an issue of Australian military patrols in the South China Sea, and warning against joint patrols with the United States. Included are implicit threats the China-Australia economic relationship will be harmed if Australia challenges the PRC more than is healthy. This is causing unprecedented debate in Australia over the depth and even the wisdom of the longstanding U.S.-Australia defense (and indeed political) relationship. As with the Philippines, the U.S. alliance is still intact, but is not quite what it was.

Taiwan has been the recipient of Chinese verbal and economic intimidation for decades, though it ramped up in 2016, following the DPP’s overwhelming victory and President Tsai taking office and her failure to follow former President Ma’s accommodationist policies towards the mainland. Simultaneous PRC influence efforts in the United States over the years have also strengthened a constituency in U.S. foreign-policy, political and business circles that believes that the United States’ implicit support for Taiwan as laid out in the Taiwan Relations Act (TRA) is not worth sacrificing the larger U.S.-PRC relationship over. This has led to doubts in Taiwan over American support and consequent demoralization.

PRC alliance busting efforts are flexible, however, and it nimbly does what’s necessary to capitalize—at U.S. expense—on openings provided by domestic politics in regional nations, and even on the United States’ own missteps.

For example, the PRC took advantage of the Obama administration’s shunning of the Thai regime—a longstanding treaty ally—following a military coup in 2014. China deftly insinuated itself with the Thai government and expanded military ties, while the United States looked primly away—apparently preferring Egyptian coups to those in Thailand.

Another example is Malaysia, with which the United States has had a longstanding—even if informal—defense partnership and solid economic ties. The PRC capitalized on internal political disputes and economic difficulties facing the Najib government in recent years, and made considerable inroads that should at least last as long as Najib does.

Look at the Bigger Picture: Alliances, Not Events

The Trump administration will do well to avoid focusing narrowly on specific events and responding to them, and instead consider the larger regional “architecture” and prioritize shoring up America’s formal and informal alliances in the Indo-Pacific.

Much depends on these alliances, which are voluntary and exist because both sides want them. However, they depend on a belief in U.S. commitment. That commitment has unfortunately been called into question in recent times.

The Obama “pivot” recognized this, but was imperfectly carried out. The Trump administration looks set to reassure anxious alliance partners by beefing up the United States’ military presence and, more importantly, ending the long-standing “accommodationist” policy towards the PRC that allowed China to steal a march on the United States and improve its military position—while whittling away at U.S. alliances in the region.

Proving commitment is not only a military thing. TPP withdrawal also damaged perceptions of U.S. commitment. The Trump administration might give serious thought to coming up with a trade arrangement, using whatever name or structure works, and restore the political damage done by scrapping TPP.

Trump’s team should be alert for what PRC is trying to accomplish—and remember that THAAD is no more about missiles than the South China Sea dispute is about fish. It’s alliances that are at stake.

Grant Newsham is a Senior Research Fellow at the Japan Forum for Strategic Studies.