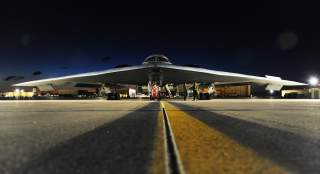 The safety and survival of American civilians along with countless US military assets hinges, to some extent, upon the existence of a nuclear-armed, air-launched long-range stealthy cruise missile able to elude sophisticated enemy air defenses and threaten or strike targets deeply lodged in enemy territory, senior Air Force officials said.

At first glance, this concept could resonate as somewhat extreme or exaggerated -- given the existing US “Triad” of nuclear weapons to include ICBMs, air-dropped bombs and submarine launched nuclear firepower.

However, in an exclusive interview with Scout Warrior, Lt. Gen. Jack Weinstein, Deputy Chief of Staff for Strategic Deterrence and Nuclear Integration, said that the emerging Long-Range Stand-Off weapon, or LRSO, is intended to function as a critical element of the US military nuclear arsenal.

Along these lines, senior Air Force leaders continue to argue that engineering a new, modern Long-Range Standoff Missile with nuclear capability may be one of a very few assets, weapons or platforms able to penetrate emerging high-tech air defenses. Such an ability is, as a result, deemed crucial to nuclear deterrence and the commensurate need to prevent major-power warfare.

The Long Range Stand-Off, or LRSO, weapon will be developed to replace the aging AGM-86B Air Launched Cruise Missile or ALCM, currently able to fire from a B-52.  The AGM-86B has far exceeded its intended life span, having emerged in the early 1980s with a 10-year design life, Air Force statements said.

Unlike the ALCM which fires from the B-52, the LRSO will be configured to fire from B-2 and B-21 bombers as well, service officials said; both the ALCM and LRSO are designed to fire both conventional and nuclear weapons.

In effect, the rapid evolution of better networked, longer-range, digital air-defenses using much faster computer processing power will continue to make even stealth attack platforms more vulnerable; current and emerging air defenses, such as Russian-built S-300s and S-400s are able to be cued by lower-frequency “surveillance radar” -- which can simply detect that an enemy aircraft is in the vicinity -- and higher-frequency “engagement radar” capability. This technology enables air defenses to detect targets at much farther ranges on a much larger number of frequencies including UHF, L-band and X-band.

Furthermore, Dave Majumdar from The National Interest writes that Russia is now developing a next-generation S-500 air-defense system able to destroy enemy aircraft at distances up to 125 miles.

Russian officials and press reports have repeatedly claimed its air-defenses can detect and target many stealth aircraft, however some US observers believe Russia often exaggerates its military capabilities. Nonetheless, many US developers of weapons and stealth platforms take Russian-built air defenses very seriously. Many maintain the existence of these systems has greatly impact US weapons development strategy.

Accordingly, some analysts have made the point that there may be some potential targets which, due to the aforementioned superbly high-tech air defenses, platforms such as a B-2 stealth bomber or services now-in-development next-generation bomber, the B-21, might be challenged to attack without detection.

A stealthy, high-tech nuclear armed cruise missile, such as an LRSO, may indeed in some cases be one of a very few weapons able to hold certain heavily defended or hard-to-reach targets at risk.

The U.S. Air Force has released a request for proposals, RFP, to industry for its Long Range Standoff, or LRSO, nuclear cruise missile program.  Up to two contract awards are expected in 4th quarter fiscal year 2017, a service statement said.

A report in “Inside Defense” says the service intends to buy 1,000 new cruise missiles and expects the LRSO program could cost about $17 billion for the missile and its nuclear-capable warhead.

Along these lines, a report from “War is Boring” explains that the Air Force’s budget request for fiscal year 2016 calls for around $1.8 billion in spending on the missile during the next five years.

“There will be two versions—one to carry an updated W80 thermonuclear warhead, and another packed with conventional explosives for non-nuclear attacks,” the War is Boring report states.

The Air Force plans to start fielding LRSO by 2030.

LRSO to Keep the Peace

Weinstein made the argument that if, for example, the Russian military believed having an advanced nuclear cruise missile would give them a distinct advantage – they would be likely to pursue it. As a result, US deterrence strategy needs to ensure its offensive nuclear fire power can match or exceed that of any potential rival. This conceptual framework provides the foundation for why many US military leaders believe it is vital for the Air Force to have an operational LRSO.

“If another nation believes they can have an advantage by using a nuclear weapon, that is really dangerous. What you want to do is have such a strong deterrent force that any desire to attack with nuclear weapons will easily be outweighed by the response they get from the other side. That's the value of what the deterrent force provides,” he said.

However, several reports have cited a group of US Senators who are making the case against development of LRSO, claiming it would both be redundant, too costly and too “destabilizing.” The concern, grounded in nuclear non-proliferation sensibilities, maintains it could further inspire nuclear arms-race type provocations and introduce new, more threatening elements into the air-triad of the nuclear arsenal.

In addition, a report in The National Interest cites the Federation of American Scientists as saying that LRSO would be redundant, expensive and not necessary.

“The FAS believes that a new, stealthy and conventionally armed cruise missile, the Joint Air-to-Surface Standoff Missile-Extended Range (JASSM-ER) is a better and cheaper choice. "The new nuclear cruise missile will not be able to threaten targets that cannot be threatened with other existing nuclear weapons," writes Hans Kristensen, director of the FAS's Nuclear Information Project, according to the report from Mike Peck of The National Interest.

At the same time, the FAS statement does not seem to address the concern from Air Force leaders that a longer-range nuclear threat may, in fact, be necessary in today’s high-tech threat environment. The LRSO, naturally, is being engineered to launch both nuclear and conventional attacks. While many details and plans for the weapon are, quite naturally, not available for public discussion, it takes little imagination to point out that the LRSO is being designed to be much more capable than both the ALCM and JASSM-ER in terms of range, command and control technology and stealth characteristics.

Weinstein also reiterated that the existence of an LRSO will not destabilize decision-making regarding the potential employment of nuclear weapons. He emphasized that, despite the presence of an LRSO, nuclear weapons will only be fired by the President of the United States.

The historic and somewhat iconic B-52, which is now bombing ISIS, will be among the platforms to be armed with the emerging LRSO; the idea is to equip the large bomber with long-range conventional and nuclear attack potential. The Air Force is now upgrading the platform with new radios, data links, avionics and weapons capability to ensure the older aircraft remains relevant and function for at least several more decades.

“You have to look at the history of it. We needed something that would go high and fast and penetrate to say – ‘well the world has changed.’ It goes low and we use it in conventional conflicts, and then we use it to fight ISIS and we use it to defend on a nuclear standpoint, and it's a great platform that has many years left in it,” Weinstein said.

“The RFP identifies the contract requirements and proposal instructions for the LRSO’s Technology Maturation and Risk Reduction, or TMRR, phase.  After receipt of industry proposals, the Air Force will conduct a source selection and award contracts to up to two prime contractors.  The prime contractors will execute a 54-month effort to complete a preliminary design with demonstrated reliability and manufacturability, which will be followed by a competitive down-select to a single contractor.”