The Real South China Sea Problem: The Shadow of China 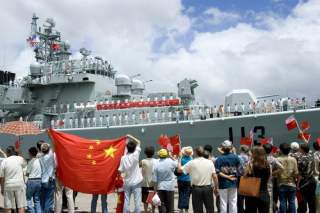 Linda Jakobson's recent report, China's Unpredictable Maritime Security Actors, is an important contribution for China watchers, especially for those who seek to understand the relationship between Chinese actions associated with its maritime disputes in Asia and its broader strategic approach to the region. This relationship is an important policy question because observers, including myself, worry that the past two years of assertive behaviour in the East and South China Seas foreshadows Beijing's approach its neighbourhood when “fully risen.”

Anxiety about heavy-handed Chinese hegemon-like behavior in the future has grown because many observers believe China's approach to maritime disputes is the product of a deliberate and systematic strategy carefully harmonized within China's party-military-civil structure. In short, what the region has been experiencing is a well thought out and superbly executed strategy.

Jakobson's report says “not so fast,” at least with regard to maritime disputes.

She argues, persuasively, that there is no evidence that China's recent actions in the maritime domain are part of a grand strategy China is pursuing to coerce its neighbors in a tailored way aiming towards a pre-defined goal. Her research convinces her that in China there is enough policy implementation flexibility for institutions with maritime interests (eg. local governments, law enforcement agencies, the People's Liberation Army, resource companies, and fishermen) to push their own agendas— particularly in the South China Sea. This results in more visibly assertive activity not specifically directed by Beijing. In short, Jakobson does not find an organized top-down structured “salami-slicing” strategic approach to China's maritime sovereignty disputes.

I found Jakobson's discussion of the interests of different Chinese entities (party, state, provincial, law enforcement, commercial plus the media) helpful, and whether or not one agrees with her conclusions regarding the absence of a comprehensive strategy, those seeking a clearer understanding of the various Chinese institutional interests involved in the maritime domain should read this report with care. I am working on a project related to President Xi Jinping's call for China to become a “maritime power,” and found Jakobson's work extremely useful.

Based on my own experience in the US Government, I find Jakobson's argument credible that various entities in China are pushing their own maritime interests while remaining within broad, and often vague, policy guidelines established by Xi. That is what good bureaucrats do. Within the US security establishment, hitching one's bureaucratic interests to authoritative Administration policy guidelines is normal procedure.

But in the US, if one goes too far and causes embarrassment or a political dust-up, it can be professionally damaging. Jakobson seems to suggest that Xi and policy makers at the highest level in China find it difficult to discipline entities that announce or execute embarrassing or counterproductive stances associated with “safeguarding China's sovereignty in the maritime domain.” I am not sure this argument holds up, given what Xi is willing to take on in his anti-corruption campaign.

But whether Jakobson is right or wrong, detailed plan or no detailed plan, China's actions in the East and South China Seas have had strategic effects. China has changed facts “on the water” to its advantage and at the same it has riven ASEAN on South China Sea maritime issues. And it has apparently gained wide public support with its tough stance on sovereignty claims.

However, from my perspective an argument can be made that the biggest strategic effect has been negative for Beijing. It has energized the Obama Administration's security relationship with the Philippines and encouraged most of China's neighbours seek closer ties with the US. It has reawakened Indonesia's concerns about the nine-dash line as well as its maritime frontier, and allowed Malaysia to become a new favourite of the Obama Administration, signing it up as a “comprehensive partner.”

So if Jakobson is right, will Xi and the Politburo Standing Committee come to the judgment that greater centralized control over its South China Sea actors is necessary to redress the adverse strategic effects of China's approach? In other words, will Beijing follow the first rule of trying to get out of a hole and stop digging?

Perhaps the digging has already stopped. The regional policies announced by Xi at November's APEC and G20 summits suggest it may have. If the current smile campaign with Southeast Asian neighbors continues, this would suggest that Jakobson's analysis is correct, and the center is cracking down on counterproductive activities.

Will this last, and is it a tactical or strategic change of policy aimed at assuaging concerns raised over the last two years of assertive maritime policies?

My bet is on tactical, because I think Xi and company are not all that worried about relations with China's neighbors. The realities of geography, military and vast economic power yield China essentially permanent advantages over its near neighbors. They are always going to live in the shadow of China, and their economies will continue to be become more closely integrated with China's. China's neighbors will always need Beijing more that it needs them. This leverage means that over the long term, whether control is centralized or not, China's strategic approach to maritime issues will leave little room for compromise.

Rear Admiral (Ret) Michael McDevitt has been at the Center for Naval Analyses since leaving active duty in 1997. During his Navy career, McDevitt held four at-sea commands, including command of an aircraft carrier battle group. He was a Chief of Naval Operations Strategic Studies Group fellow at the Naval War College and was director of the East Asia Policy Office for the Secretary of Defense during the George H.W. Bush Administration. He also served for two years as the director for Strategy, War Plans and Policy (J-5) for U.S. CINCPAC. McDevitt concluded his 34-year active-duty career as the Commandant of the National War College in Washington, D.C.