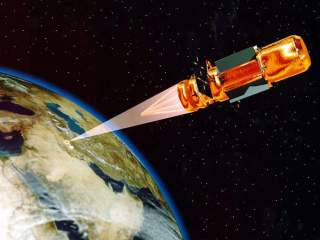 Russia hopes to build a space-based missile defense warning system to complement its ground-based air and missile defenses. The Russian military has rebuilt its terrestrial air defense system since its decline in the aftermath of the Soviet collapse, but Russia hopes to gain an upper hand in the control of space as well.

“We’re actively moving along the way of creating a completely new generation of armaments and military hardware for air and space defense, which will help make our facilities fully secure from a potential enemy’s sudden missile attack,” deputy prime minister Dmitry Rogozin told the Moscow-based news agency TASS this week.

According to TASS, Rogozin said that the world is entering an “epoch” of space-based armaments—and Russia has to win supremacy in that sphere. The first step to achieving that supremacy is to build a new space-based missile attack warning system, he said, according to the Russian news report. Such a system, if successful, could aid in tracking and destroying incoming intercontinental ballistic missiles.

In previous years, the United States too had explored developing a constellation of space-based radars for intelligence-gathering purposes. One such program, launched in 2001, was called the “Space Based Radar.” The idea behind the SBR was to provide global radar surveillance with Surface Moving Target Indication (SMTI), Synthetic Aperture Radar (SAR) imaging and High Resolution Terrain Information (HRTI) radar modes. The Pentagon even explored upgrading the system to include a missile defense capability as well.

In 2005, the ambitious program was renamed Space Radar—consolidating the Department of Defense (DOD) and U.S. intelligence community’s (IC) requirements in the hopes of brings costs under control. This cost-saving approach of combining the IC and DOD objectives for SR turned out to be, as Maschenka Braganca at the Center for Strategic and International Studies (CSIS) explains,

“. . . one of the major stumbling blocks, as military and intelligence communities were unable to agree upon system requirements and control. The dispute between the IC and DOD circled largely around the strength of aperture imagery and high revisit rates, as DOD requires more rigorous activity in tracking motion of moving objects than the Intel Community.”

Ultimately, cost and myriad technical challenges doomed the U.S. program. The projected price tag for the system approached $38 billion. The program was eventually cancelled in 2008.

Only time will tell if Russia will be more successful.