The Real Threat of Chinese Nationalism 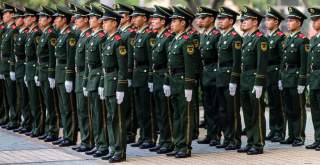 On Monday, China’s Shanghai Composite Index dropped 8.5 percent, the largest percentage fall since the financial crisis hit in 2007. Hours earlier it was reported that Japan’s prime minister, Shinzo Abe, would not attend a ceremony in China on September 3 marking the seventieth anniversary of the end of World War Two. So far, China’s economic slowdown has been seen as separate from the country’s antagonisms with Japan. Both domestic and antiforeign discontent might concern China watchers, and both might be simmering at the moment, but each registers as its own threat, requiring its own policy response. This is wrong. What connects these issues is the worrying role popular nationalism has taken on in China in the era after Mao Zedong and, more recently, after Deng Xiaoping.

All of this comes on the eve of a state visit by Chinese president Xi Jinping to the United States in September. Xi lands in Washington as the leader who has, according to President Obama, “consolidated power faster and more comprehensively than probably anybody since Deng Xiaoping." No force has been more important in Xi’s power grab than nationalism. He has presided over a country that has stoked patriotic fervor as well as antagonized its neighbors and the United States. The most immediate result of stirring up national sentiment has been to strengthen Xi’s power within the seven-member Politburo Standing Committee. With this backstop of popular support, Xi has steadfastly pursued a set of programs, even amid some opposition. For example, his anticorruption purge has continued even after an authority as prominent as former president Jiang Zemin warned against it becoming too ambitious.

Nationalism has worked for Xi. So far, patriotic, mass support has protected him from a strong, public challenge by the military or the party. But nationalism in China has an uncertain and at times combustible relationship with the Chinese Communist Party (CCP) and its leaders in Beijing. In China, street-level, unchecked nationalism—nationalism en masse—is a precarious threat both to the CCP and to regional and global stability overall.

In 2012, Xi took control of a China unthinkable without Deng Xiaoping. By opening up its economy and jettisoning Mao-era programs, China created an average of 10 percent growth per year over the thirty years beginning with 1980. Millions were brought from subsistence living to a point where median income now approaches a “middle-income trap.” As if to acknowledge this change, Xi reiterated his commitment to Deng’s “socialism with Chinese characteristics” shortly after coming to power.

But this phrase, “socialism with Chinese characteristics,” is by now, of course, “nonsense,” China scholar Roderick MacFarquhar said at the time. Communism no longer connects the nation; it is no longer a unifying ideology. Instead, China now has

"No ideology. No sense of what the country is about. And the only way, and it is a very dangerous way, that they can achieve some kind of unity between party, state and people, is the dangerous route of nationalism."

Over the last two-and-a-half decades, and with the strict tenets of communism shed as a unifying ideology, nationalism has been paired with robust economic growth in China to legitimize the country’s leadership. Both contributed to an “authoritarian resilience,” as China scholar Jessica Chen Weiss describes it. Now, nationalism and economics have begun to decouple as growth has slowed and stocks have tumbled. Comparisons with Deng have turned from complimentary of Xi to concerning for China as a whole. “The country is now going through a crisis of transition, unparalleled since Deng Xiaoping set out to put clear water between China’s future and the Mao era,” writes George Magnus, an associate at Oxford University’s China Centre and senior advisor to UBS, in the Financial Times.

What connects the faltering economy with the animosity between China and Japan is that antiforeign protests are some of the only forms of mass, organized protest that have been permitted to take place in China. As Weiss points out, while anti-Japanese demonstrations were repressed in the 1990s and 2000s, they nonetheless flared up in 1985, 2005, 2010 and 2012. Moreover, she notes, the 1985 anti-Japanese protests were early precursors of the pro-democracy protests of 1986 and 1989, giving participants much needed experience in mass mobilization. Weiss explains what the CCP knows well, that “[e]ven strong authoritarian governments may have difficulty reining in protests that are widely seen as patriotic and legitimate."

History shows that Chinese officials quickly repress demonstrations about domestic issues. This is less the case with antiforeign protests, which not only can have an intrinsic, patriotic legitimacy leaders find difficult to counter, but also, as Weiss argues, can have a value for China’s leaders to signal resolve in diplomacy.

In a statement released for the anniversary of the end of World War II on August 15, Japanese prime minister Abe said that his “heart is rent with the utmost grief” about the damage done by his country. But he also emphasized that “[w]e must not let our children, grandchildren, and even further generations to come, who have nothing to do with that war, be predestined to apologize.” This statement joins a list of recent perceived slights, including a row this summer over the treatment of the war in Japanese textbooks, that irk many Chinese.

Chinese-Japanese tensions have eased somewhat since the worst days of 2012, which Weiss says saw the largest anti-Japanese demonstrations since relations were normalized in 1972. Of the 287 prefecture cities Weiss and a colleague studied in 2012, nearly three-quarters saw street protests. Should Xi tolerate another spate of anti-Japanese protests, he would be using popular sentiment to signal to Japanese officials that China’s avenues for compromise are few. Importantly, this wish to signal resolve in diplomacy is weighed against the threat that such protests will spiral out of control, turning to domestic grievances and turning against Beijing. In this way, any anti-Japanese protests ostensibly about the Second World War are a potential rallying point for discontent about the present. “In current American usage,” the scholar Bernard Lewis noted, “the phrase ‘that’s history’ is commonly used to dismiss something as unimportant, of no relevance to current concerns.” Not so in much of the world, and not so in China now.

China’s leaders, Xi chief among them, can wield nationalism for their own ends. And now, leaders may wish to double down on nationalism as both the economy and the legitimacy the government has gained in the post-Deng era from a strong economy weaken. But nationalism isn’t an easy tool to control. As Weiss points out,

"the past two Chinese governments fell to nationalist movements that accused them of failing to defend the country from foreign encroachments: the Nationalists under Chiang Kai-shek and the Manchu leaders of the Qing dynasty."

Going into this autumn, policy makers should be mindful of what is happening in China’s streets, as well as what Xi does and says before and during his trip to Washington.