The Realism of Rodrigo Duterte 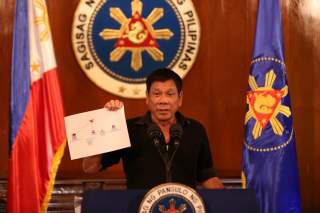 In the pages of Foreign Policy last week, Council on Foreign Relations Senior Fellow Max Boot weighed in on the frightening moves of what many are calling Asia’s Donald Trump -- the new president of the Philippines, Rodrigo Duterte. In his analysis, Boot attacks the underpinnings of realist foreign policy thinking, using Duterte’s recent actions as his strawman. He notes that “ideology and domestic politics do not much concern these thinkers [realists]; they believe that a nation’s foreign policy is much more likely to be shaped by factors such as geography, demography, and economics.”

Boot continues his attack, explaining that “the Philippines is Exhibit A in illustrating the limits of the realist conceit that some unvarying strategic logic governs foreign policy. The Philippines has seen a vertigo-inducing change in its foreign-policy orientation since Rodrigo Duterte became president this summer. This crude populist is now transforming the Philippines’ relationship with the United States in a fundamental and worrying manner.”

Certainly all international relations theories have their limits. But the recent actions of Duterte that Boot invokes -- specifically, Manila's warming ties to China -- may go a long way to actually help prove why nations act in a realist manner, as opposed to discrediting it; and we can thank the Obama administration for that.

For Better or Worse: The Realism of Duterte:

Duterte’s actions are certainly troubling for anyone who champions stronger ties between Washington and Manila in the face of China’s aggressive actions throughout Asia. His approach may well fit within the realist prism of international affairs, if we look at it from a regional framework rather than a U.S.-centered perspective.

What if Duterte, already predisposed to an anti-American stance, fears that Washington simply won’t come to his aid in the event of a military clash over Scarborough Shoal, or that Washington won’t back Manila against Beijing in other areas of potential competition? Could Duterte have simply determined that his nation is best served by hedging its bets between Washington and Beijing? After all, it is not clear which country will be the dominant player in the region for years to come. Perhaps, seeing that China’s position has grown quite strong in the region, Duterte simply calculated that China is the stronger side, and he wants to be on it.

Such a line of thinking cannot be dismissed out hand. In my own recent travels throughout Asia, diplomats and officials from allied and friendly governments throughout the region have asked me repeatedly whether America would stand with them in a crisis -- be that a dispute in the East China Sea over the Senkakus, or over Taiwan, or even in the South China Sea. They feared that American commitment was waning due to more than a decade of war and trillions of dollars spent in the Middle East, and a financial crisis that Washington is still coming to grips with. One prominent Taiwanese diplomat was even so bold as to call Americans “a beaten people.”

Such a narrative of an America that cannot or will not come to Asia’s defense might have been unintentionally reinforced by President Barack Obama breaking his “red line” pledge in Syria, when he failed to intervene after Syrian President Bashar Assad used chemical weapons against Syrians. While I was very much against military action against Assad, the idea that Washington made -- and broke -- a commitment to act against a regime that was slaughtering its own people with chemical weapons had a major impact on the thinking of Asian diplomats who count on U.S. security guarantees or hope to see Washington remain a counterbalancing force to China in the region. After events in Syria in 2013, anytime I spoke to an Asian diplomat, the first question they would ask me would always sound something like this: “How can you say you would honor your commitments to us when you won’t even punish a two-bit dictator like Assad who gasses his own people with weapons of mass destruction? How can we trust you when it comes to a bigger crisis, like something involving the Chinese?”

From there it gets worse. In the time since America declared a so-called pivot, or rebalance, to the Asia-Pacific region, global events have always overtaken said worthwhile enterprise. Russia’s aggression in Ukraine, the ups and downs of the Iran nuclear deal negotiations and eventual agreement, the rise of the Islamic State, and the tragedy that is the Syrian civil war have all taken away needed bandwidth to reassure America’s allies that Asia can and will be the most important region for U.S. diplomacy. Domestic challenges also interfered: A showdown over the debt ceiling caused President Obama to skip an important regional summit in 2013, and this did not help matters. Equally unhelpful is the apparent lack of interest when it comes to the Trans-Pacific Partnership -- the bedrock of America’s commitment to the region. Unfortunately, time and time again, and for worthy reasons, Washington’s attention keeps getting pulled away -- each time reinforcing what many in Asia feel is America’s penchant for talking big but delivering little as China chips away at the status quo.

International affairs through the realist perspective is all about pragmatism at its core. Duterte might simply feel that America won’t stand by him in a crisis, or that China’s offer -- $13 billion in commitments so far, and still counting -- is just a better deal compared with American uncertainty. He may have looked at his nation's unchanging geography, and the benefits Beijing could bring to the table quickly, and decided what he felt was in his country’s interests. While I certainly disagree with Duterte, what is more realist than such a calculation? Thanks to circumstances within and outside of America’s control, don’t be shocked if other nations make the same calculation in the future.

Harry J. Kazianis is the new Director of Defense Studies at the Center for the National Interest (formerly the Nixon Center). He also serves as the Executive Editor of The National Interest as well as a fellow at The Potomac Foundation and China Policy Institute (University of Nottingham). Kazianis in the past has served as Editor of The Diplomat and led the foreign policy communications efforts of the Heritage Foundation. You can follow him on Twitter: @Grecianformula.

This first appeared in RealClearWorld here.