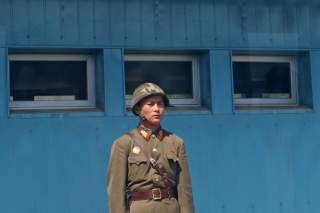 Over the past few months North Korea has undertaken a large diplomatic effort. It has reached out to traditional opponents like the United States, Japan and South Korea. Contemporaneously, it has pursued a warmer relationship with Russia. But one nation has been missing from that charm offensive: China.

The border between China and North Korea is the focus of a significant amount of investment activity. But when one looks more closely at that investment, a pattern begins to emerge: Chinese spending along the border isn’t replicated within North Korea.

Emblematic of that spending—and perhaps also of the wider relationship—is the new bridge over the Yalu River at Dandong. The bridge itself is no small feat of engineering as it spans nearly 1.5 kilometres. Complementing the bridge, is a new high-speed-rail link to Dandong, from Shenyang, intended to feed into the new Yalu River crossing point. On the North Korean side of the bridge, there’s nothing but dirt.

The port in Rason in northeastern North Korea has also been developed as part of a trilateral effort on the part of North Korea, Russia and China. The port, for its size, is remarkably empty. A seaside hotel, which dwarfs the surrounding infrastructure, sits vacant at the end of a dirt road.

The size of the investment is obvious but the results are not so easy to identify. For all of its spending, Beijing has not been able to convert the effort into stronger diplomatic relations. The North, for its part, is clearly baulking at the possibility of being so heavily dependent upon China. As a result it’s reaching out in an apparent effort to diversify the sources of its relationships.

Pyongyang has reached out to South Korea and Russia. In October, a senior North Korean delegation made an unannounced visit to Incheon for the closing ceremony of the 17th Asian Games. And after receiving a high-level mission from Pyongyang, Putin seems receptive to developing the relationship further—he’s written off significant debt from the Soviet era and pledged another billion in infrastructure investment.

Russia already has a presence on the ground in North Korea’s Special Economic Zones (SEZ) but it’s dwarfed by China’s. During my visit to the Rason Trade Show in August 2013, there were a dozen Chinese companies operating stalls for every Russian or South Korean one. Still, it would seem logical for Pyongyang to seek an expansion of that investment if its intent is to reduce its dependence on Beijing.

North Korea has also reached out to Japan. Relations between the two states face inherent difficulties due to the large part history plays on both sides. For the Japanese, the issue relates to the North’s nuclear program and its abduction of Japanese citizens. On the other hand, Japan plays a large role in the historical narrative of Pyongyang’s propaganda. Pyongyang has signalled a willingness to compromise on the issue of abductions and it seems possible that could be the basis for developing a more stable relationship between the two.

Finally, although the position of the United States towards North Korea has not markedly altered, Pyongyang has signalled that it’s open to improving their relations. A major stumbling block to any future relations was the imprisonment of two US citizens. Prior to their release, the North Koreans signaled to the Americans that they would be interested in welcoming a cabinet-level official to their country to facilitate the prisoners’ release.

A wary US sent James Clapper—a cabinet-level official, but not a member of cabinet or a diplomat—to Pyongyang to retrieve the two citizens. Interestingly, the North Koreans were puzzled when, upon Clapper’s arrival the US was not prepared to resume more high-level talks.

Taken together, this recent bout of activity paints a picture of a North Korea clearly operating from a different diplomatic playbook to the confrontational one it had been using for the previous two years. It doesn’t follow, however, that the North Korean leadership has altered its underlying strategic aims. All of those negotiations have essentially pursued a similar objective—that of diversifying relations and reducing the North’s diplomatic reliance on China.

Those actions are neither unique to the region nor unprecedented for Pyongyang. During the Cold War North Korea relied upon the support of the Soviet Union and since that time it has played a successful game wherein it seeks the support of outside powers to leverage its position for a maximum advantage and independence. To that end it has—at various times—embraced the South (during the days of the ‘Sunshine Policy’), China, Japan and the US.

For the Kim dynasty, exploiting the North’s weak position for maximum gain has long been a hallmark of their foreign policy. As such, although the means of pursuing survival have altered, for the time being, Pyongyang has not shifted internally. The rise of China may prove to be an insurmountable obstacle but the Kim dynasty is deploying its traditional means of resisting interference in order to maximise its own freedom of action.

Robert Potter is currently assisting with research at the Kennedy School. Previously he was a visiting scholar at Columbia and a student at Cornell. He took part in a research  program in North Korea and China in 2013. This piece was first posted on ASPI’s the Strategist here.