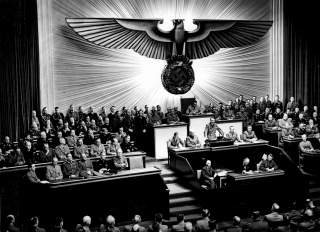 On Oct. 24, 1942, German Gen. Georg Stumme, commanding officer of the Third Reich’s Panzer Army Africa — which included the famed Afrika Korps — was riding in a car along a track with his signals officer, Col. Andreas Buechting, near the front line for an inspection. It was day two of the Second Battle of El Alamein, the enormous British-led offensive in Egypt which would turn the tide in North Africa in the Allies’ favor.

How the monocle-wearing Prussian officer ended up in the car, in command of all Axis forces in the theater, is an odd story. Three months earlier, this Knight’s Cross recipient and veteran of the campaigns for France, Yugoslavia and Greece was sitting in a jail cell facing five years in prison, Hitler having relieved him of command and ordering his court martial after an incident on the Eastern Front.

A court martial ordered by the Fuhrer, of course, always ended in a guilty verdict. Stumme was found guilty.

But here was Stumme, free, and having replaced Erwin Rommel — the Desert Fox — who had returned to Germany due to sickness and exhaustion. And that is when Stumme, his driver and Buecthing appeared within sight of Allied troops. Suddenly, a bullet struck Buechting in the head, killing him — which was one of the last things Stumme witnessed in his life.

Back in June 1942, Stumme was the commander of the XXXX Motorized (Panzer) Corps, part of the German forces preparing to push into Southern Russia as part of Case Blue, the strategic offensive toward the Baku oil fields and Stalingrad. Stumme, as a traditionalist German officer, wrote a one-page summary of the upcoming offensive and distributed it out to the XXXX Corps’ divisional commanders, according to historians David M. Glantz and Jonathan House’s 2009 book To the Gates of Stalingrad.

How Stumme distributed these orders was the problem — flying them by air. In January 1940, the German plans for the invasion of Belgium fell into Allied hands after a liaison plane crashed behind the lines.

Hitler forbade such flights in the future, enforcing strict requirements on who would receive operational orders and how, according to Glantz and House. But German officers often ignored Hitler’s orders, as German military tradition and Auftragstaktik — mission-type tactics — considered information sharing a critical component of success, allowing subordinate officers flexibility on the battlefield while obeying their commanders’ intent.

So as a result on June 19, 1942, shortly before the offensive, an officer with the XXXX Corps’ 23rd Panzer Division, Maj. Joachim Reichel, was flying in a long-legged, big-winged Fi 156 Storch liason plane with his Case Blue orders, and an objective map, when the pilot flew off course and crashed behind Soviet lines.

The crash shattered the pilot’s skull and killed him.

Reichel ran away with the secret plans and was shot when resisting Soviet soldiers, according to a Soviet account of the event, although records from the ground are contradictory and unclear.

Stumme’s headquarters were thrown into a panic at Reichel’s disappearance, and he scrambled a reinforced company from the 336th Infantry Division on a daring search and rescue mission. The soldiers would later discover the plane is a marshy, shallow valley — but did not find Reichel or the pilot.

The Soviets had the plans.

Stalin, however, largely ignored the compromised orders, believing them to be one of many potential future German offensives. He did bolster the tank strength of Soviet forces in the southwest as a precautionary measure, bringing up the total number of tanks on the Briansk Front to 1,600, although in actual practice the Briansk Front and its commander, Gen. Filipp Golikov, would suffer during the upcoming battle due to lack of coordination.

Case Blue, of course, would end in a major German strategic defeat, with the destruction of the German Sixth Army at Stalingrad in early 1943.

Stumme, meanwhile, was out of a job for this blatant violation of Hitler’s operational security measures. Hitler had him court-martialed, and he was only saved from prison due to the pleading of his allies within the officer corps including Wilhelm Keitel — chief of OKW, the military high command — and Herman Goering, the Luftwaffe chief and de factonumber-two Nazi.

After Rommel became ill, Stumme was off to North Africa just as Britain’s El Alamein offensive was about to begin.

It’s not clear how Stumme died. One account states that before his death in Egypt near the front line, he was seen outside his car, hanging onto it as the driver sped out of the line of fire. The Allied troops would later discover Stumme lying on the track, deceased but with no bullet wounds.

One theory is that he might have suffered a heart attack during the ambush. The 56-year-old general had chronic high blood pressure.