The Road to Singapore: Trump, the Two Koreas and the Quality of Mercy 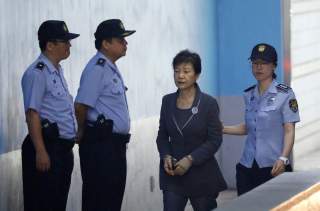 The latest twists and turns in the proposed upcoming Singapore Summit have all the makings of the classic 1940 B-grade comedy “Road to Singapore,” with Bob Hope, Bing Crosby and Dorothy Lamour. The newly hesitant Kim Jong-un—like Hope and Crosby, reluctant sailors being pushed toward undesirable marriages in the film—is expressing sudden misgivings about ‘the Libya model” and “CVID” (complete, verifiable and irreversible dismantlement of North Korea’s nuclear weapons) before showing up at the altar in Singapore. The official voice of North Korea, KCNA, has even threatened to leave President Donald Trump jilted unless certain concessions regarding U.S.-ROK military exercises are made.

The shrewd Kim appears to have calculated that President Trump, with a series of challenging political situations at home and abroad, needs his “Nixon goes to China” moment more than Kim does—who, after all, has complete control over his domestic messaging. The avid chants of “Nobel, Nobel” by Trump supporters at a recent rally—blissfully ignoring the “pay to play” scandal that followed in the wake of the last Nobel Peace Prize granted for a Korean Summit—only add to an image of how desperately the White House wants this summit to happen.

Nor, given past North Korean behavior, is it particularly surprising that Kim apparently decided to throw the overly eager South Korean President Moon Jae-in at least temporarily under the bus by abruptly cancelling a follow-up meeting with Seoul with less than twenty-four hours’ notice. North Korea’s priority has always been to have direct talks with the Americans—with the American President serving as the Holy Grail. Pyongyang almost got there with the preliminary visit of Secretary of State Madeleine Albright in October 2000, but the Clinton Administration ran out of time. Kim’s grandfather and father were able to receive former Presidents Jimmy Carter and Bill Clinton, respectively, but that was not quite the same. Seoul, however, having now delivered President Trump on a silver platter via South Korean President Moon’s courting of First Daughter Ivanka Trump at the closing ceremonies of February’s Pyeongchang Winter Olympics, is no longer the priority.

Pyongyang’s usual mantra has been that, since the Seoul “puppet” regime of Syngman Rhee failed to sign the 1953 Armistice Agreement for political reasons, that peace treaty talks should involve Pyongyang and Washington and not Seoul—leading to the ultimate withdrawal of U.S. forces from the peninsula. There is no indication that this goal has changed. President Trump’s periodic rhetoric about deadbeat allies who “don’t pay their fair share” has seemingly encouraged the cut-off Seoul faction in Pyongyang with great expectations.

President Moon has been more than generous in his efforts to woo Kim Jong-un. The list of economic incentives—something Pyongyang has come to expect—in April’s Panmunjom Declaration included the following: “South and North Korea agreed to actively implement the projects previously agreed in the 2007 October 4 Declaration, in order to promote balanced economic growth and co-prosperity of the nation. As a first step, the two sides agreed to adopt practical steps towards the connection and modernization of the railways and roads on the eastern transportation corridor as well as between Seoul and Sinuiju for their utilization.”

This is quite forgiving to a leader deemed as responsible for plotting, among other transgressions, the torpedoing of a South Korean naval vessel in 2010, resulting in the deaths of 46 South Korean sailors; the shelling a South Korean island later that same year, killing two South Korean marines and two civilians; the blowing off of the legs of two South Korean soldiers with land mines in the DMZ in 2015; as well as killing his own uncle and brother—the later assassinated at an international airport.

All is seemingly forgotten for the ruthless ruler of Pyongyang. Yet President Moon’s government has shown no mercy to his hapless predecessor former President Park Geun-hye. Many Korea watchers in Washington were shocked when in April, the same month as the love feast with Kim Jong-un at Panmunjom, Park was sentenced to be locked up for twenty-four years in prison like the hapless Mary Queen of Scots who spent almost two decades in prison before her execution.

President Park was undoubtedly foolish in her dealings with her corrupt former girlfriend Choi Soon-sil. However, she is not known to have blown off the legs of any South Korean soldiers nor, though reportedly estranged from her brother, to have murdered him with chemical weapons.

She is also a woman both of whose parents were assassinated. I once, decades ago as a Peace Corps volunteer, met her mother, then First Lady Yuk Young-soo, on the streets of Seoul as she raised funds for the South Korean girl scouts. A true people’s First Lady, Madame Yuk went on to die a martyr’s death for South Korea, shot dead by a North Korean agent.

The imprisonment of former President Park, like Mary Queen of Scots, appears to be based largely on ideology—in this case progressive versus conservative as opposed to the Protestant versus Catholic split of an earlier era. There is a saying now, as progressive and conservative parties alternate the South Korean presidency, that there is a presidential prison cell waiting for one’s predecessor when a new South Korean President comes to power.

South Korea’s government has apparently forgiven the murderous Kim Jong-un, but not former President Park. As Shakespeare famously noted: “the quality of mercy is not strained…'Tis mightiest in the mightiest; it becomes the thronèd monarch better than his crown.”

The tyrannical Kim Jong-un, at the urging of the Trump administration, recently freed three imprisoned U.S. citizens following last year’s horrific death of UVA student Otto Warmbier at the hands of Pyongyang. Seoul could follow Pyongyang’s lead by freeing President Park Geun-hye. The quality of mercy is not strained.