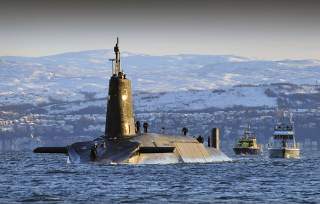 Sometime in the early 2030s, the largest submarine ever built in the United Kingdom will slip into the waters off Barrow-in-Furness, pass through a series of docks and make for the Irish Sea. HMS Dreadnought will be the ninth ship to bear that historic name, and by far the most lethal. The Dreadnought-class submarines will be the custodians of the UK’s nuclear arsenal for at least thirty years, preventing the country from falling victim to surprise attack.

The United Kingdom’s first ballistic-missile submarines were launched in the 1960s. The four Resolution-class submarines, two of which were also built at Furness, were built around the American Polaris submarine ballistic missile. The Resolutions were the sea-based leg of England’s nuclear deterrent force, and under a plan called Continuous At Sea Deterrence (CASD) the country has kept at least one nuclear-missile submarine on watch every day for the last forty-nine years.

On paper, the Dreadnoughts are highly impressive submarines. Each will be 501 feet long, nine feet longer than their predecessors, and will displace 17,200 tons—1,300 more tons than the Vanguard boats. The submarines will have a crew of 130 officers and enlisted personnel.

The submarine’s nuclear armament will be reduced from that of earlier submarines, but still pack a formidable punch. The Dreadnoughts will carry twelve ballistic-missile launch tubes as opposed to the Vanguard’s sixteen, and will carry, at least at first, the same American-built Trident II D-5 submarine-launched ballistic missiles. The Vanguard class carries eight Trident II D-5s, with a range of 4,600 miles. Each Trident has eight one-hundred-kiloton nuclear warheads, giving each submarine a total of 6.4 megatons of nuclear firepower.

The Ministry of Defense’s 2010 Strategic Defence and Security Review stated that, despite the twelve tubes for ballistic missiles, each Dreadnought will carry just eight Trident IIs with up to five one-hundred-kiloton warheads each, for a grand total of no more than forty operational warheads. While this represents a decrease of more than a third in yield, it’s still safely in the multi-megaton range and sufficient to overcome the missile defenses of any potential adversary.

Although the Dreadnoughts will initially carry recycled Trident II missiles, the ships are being built with the new Anglo-American Common Missile Compartment (CMC) to allow them to use the same new missiles as the U.S. Navy’s new Columbia-class ballistic-missile submarines, also in the early stages of construction. The CMC uses a quad pack design, loading and offloading ballistic missiles in packs of four. Since the Dreadnoughts will carry eight missiles, this will make loading and unloading missiles much easier.

The new HMS Dreadnought carries on an illustrious name that goes back to the sixteenth century and the days of the Tudor Navy. The name was also lent to a new class of fast battleships at the dawn of the twentieth century so inspirational that the name Dreadnought became synonymous with the massive battlewagons. Dreadnought VIII was the UK’s first nuclear-powered submarine. Dreadnought IX, the largest submarine class, will serve as the UK’s silent protector, promising swift nuclear vengeance in the event of nuclear attack. “Fear God and Dread Nought” indeed.