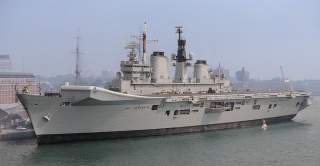 HMS Illustrious, the last of the Royal Navy’s Invincible-class carriers, has set sail from Portsmouth to meet her doom at a Turkish scrapyard.

The British government chose to sell her for scrap in 2014, but Illustrious’ final journey nonetheless signals the end of an era during a low point for the shrinking Royal Navy. Illustrious was the second Invincible class between HMS Invincible and Ark Royal, scrapped in 2011 and 2013, respectively.

The carriers were products of the Cold War, as Britain designed them primarily to hunt Soviet submarines in the North Atlantic with their on-board complement of up to 22 helicopters of various types. Fixed-wing Harrier jets, taking off with the aid of a ski-jump ramp, provided extra firepower and defense from enemy aircraft.

While they were technically carriers by any reasonable definition, these 22,000-ton vessels were significantly lighter than the 100,000-ton Nimitz-class supercarriers of the U.S. Navy. A better proxy would be the Russian Kiev-class carriers — only one which survives today in Indian Navy service.

The Invincible class also had similarities to U.S. Adm. Elmo Zumwalt’s design for a small, practical “Sea Control Ship” that would protect convoys from submarines and air attack.

Invincible would serve during the Falklands War in 1982. Illustrious, which launched in 1978 and was still undergoing trials when Argentina invaded the islands, did not. But the war caused the Royal Navy to rush her into service, and she relieved her sister ship in the South Atlantic a few months after Argentina’s defeat

Illustrious largely lived out the ’80s as an anti-submarine vessel patrolling in the Atlantic. In 1986, her gearbox exploded and caught the ship on fire for several hours — the vessel was nearly lost. In the ’90s, she sailed in the Adriatic Sea and Persian Gulf aiding no-fly zones over Bosnia and Iraq.

In 2000, she supported a British task force that dropped 600 soldiers into Sierra Leone, helping save Freetown from falling to an army of marauding child soldiers.

After that, she roamed around on training exercises, responding to disasters and bailing British citizens out of hotspots. She also helped allies hone their carrier-hunting skills.

In 2013, the U.S. Navy attack submarine USS Dallas apparently sneaked close enough to Illustrious during a simulated battle to pretend “sink” her. The same thing happened during a 2007 exercise involving the Canadian submarine HCMS Corner Brook.

Within a few weeks, Turkish scrap merchants will break Illustrious apart. But despite a campaign to save her, convert her into a hospital ship or — bizarrely — turn Illustrious into a traveling billboard for British trade, she is old and expensive to keep running. One of the biggest issues are her four, ancient, Olympus TM3B gas turbine engines, which are rickety.

Keeping Illustrious in service was a no-go. The Royal Navy has a manpower shortage that must support its lone helicopter carrier, HMS Ocean, and the larger carriers HMS Queen Elizabeth and Prince of Wales when they arrive in the 2020s.

Britain also got rid of its Harrier jump jets six years ago.

“She was a lovely ship, she was cutting edge technology,” David Stares, who served aboard Illustrious during the 1980s, said according to the Belfast Telegraph. “Now she’s gone despite a lot of people wanting to save her. She was a brilliant ship, great crew, she was a large family.”

Regardless, the Royal Navy has deeper problems than scrapping the last of its 1970s-era carriers. Aside from the shortage in personnel, the budget has shrunk and the fleet is hard-pressed to protect Britain’s nearby waters.