The Royal Navy's New Ship Plans Have a Serious Flaw 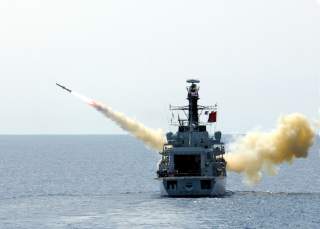 In 2023, the Royal Navy hopes the first of its new Type 31 frigates will hit the waves to replace HMS Argyll, the first of 13 Type 23 frigates scheduled to begin retiring that year, with another to retire every year until 2035. The new vessels will add desperately needed modern warships to the United Kingdom’s depleted fleet.

However, that’s the hope. It’s not realistic, according to program officials cited in a report from Defense News. The compressed timetable will likely delay the Type 31, and worse — tight budgets are forcing compromises with the vessel’s weapons and capabilities. The result will be a Royal Navy adopting a smaller, less combat-capable ship than the Type 23, which has served since the 1980s as the backbone of Britain’s submarine hunting fleet.

Keep in mind that the United Kingdom is not replacing all of its Type 23s with Type 31s. Britain plans to build five or six Type 31s — the number is not clear — along with eight new Type 26 frigates which will have dedicated anti-submarine warfare equipment. While the Royal Navy has not selected a final design for the Type 31, the preliminary proposals from British shipbuilders fall short.

Whether the Type 31 will even be proper frigate is up for debate. One possibility for the frigate is a stretched version of the Samuel Beckett-class offshore patrol vessel built by Babcock Marine, currently in service with the Irish Navy. Another is a BAE-built enlargement of the Al Shamikh-class corvette in service with Oman — renamed Cutlass — or an enlarged River-class offshore patrol vessel.

BMT Defense Services should offer a new design, the Venator-110, which is favored by Royal Navy officers. A fourth design is Stellar Systems’ Project Spartan which distinctive for its bow ramp — to deploy small boats — and large hangar for helicopters and drones.

This final ship offers towed-array and hull-mounted sonars, but appears to lack dedicated anti-submarine weapons unless carried and deployed by an onboard helicopter. The existing Type 23 frigate has that equipment, plus its own torpedoes, anti-ship missiles and a 32-cell anti-air missile launcher.

In any case, the Type 31 risks being outmatched in a 21st century conflict. Retired Adm. Mark Stanhope, a former First Sea Lord, told the House of Commons Defense Committee that the Type 31 may lack anti-submarine capabilities and close-range sonars — most importantly by lacking a structure built to be quiet, thereby allowing enemy submarines to detect the frigate and escape.

All of the tentative Type 31 designs feature a naval cannon. While an important weapon for counter-piracy and shore combat support, the Royal Navy will need a design capable of fitting a vertical launch system for anti-aircraft or anti-ship missiles for the Type 31 to stand much of a fighting chance at sea. It could plausibly feature some combination, but the ship’s small size will force tradeoffs.

The frigate will be excellent at chasing pirates, though a proper corvette could do the same job for less. If this story sounds familiar, it echoes the U.S. Navy’s own travails with turning the Littoral Combat Ship into an expensive pseudo-frigate that is both underpowered and overpowered for the challenges it will conceivably face.

“It hardly make sense to have frigates that aren’t frigates,” journalist Gabriele Molinelli wrote at U.K. Armed Forces Commentary. “If they aren’t useful for ASW and they have just a basic local area air defense fit … what are they good for? What is their realistic wartime role and position? How do they solve the shortage of escort vessels in the Royal Navy?”

“Simply: they do nothing to solve that shortage.”

The small size of the Type 31 also have analysts worried the up-sized patrol ships will be under-gunned versus a real enemy.

“This is, surely, a re-run of the decision-making that led to the procurement of Snatch Land Rovers for the British Army,” Peter Roberts of the Royal United Services Institute wrote in March 2017. “It is certainly a vehicle that suited constabulary duties in Northern Ireland exceptionally well, but it was not good for Iraq, where it did not protect British servicemen and caused many deaths and injuries to British servicemen in Iraq.”

“Would such vessels really be able to defeat an unmanned explosive craft in the Gulf of Aden (like the Royal Saudi Navy did recently), counter a anti-ship cruise missile strike (as the U.S. Navy did last month in the Red Sea), face down Iranian challenges to innocent passage through the Straits of Hormuz or meet the new Chinese corvette and survive?”

The Royal Navy will find out. Britain’s fleet needs numbers and can’t wait much longer as its older ships get longer in the tooth, however, there is a danger in making up for a shrinking frigate fleet with stretched corvettes that are good for little else but maritime security work.