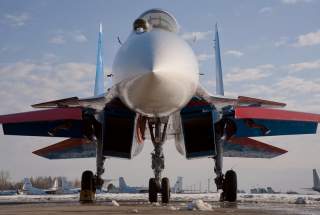 The Kremlin’s air war over Syria demonstrated that Russia’s once dilapidated military has recovered from its low-point in 1990s in the aftermath of the Soviet collapse. But while the Russian Air Force showed off new precision-guided weapons and new high-performance aircraft like the Sukhoi Su-30SM Flanker-H, Su-34 Fullback and the Su-35S Flanker-E, it was evident that Moscow still lacked certain capabilities.

One such gap was the lack of a targeting pod like Northrop Grumman’s LITENING G4 or the Lockheed Martin Sniper. However, Russia seems to be rapidly closing that gap with the development of its own indigenous targeting pod under the auspices of state-owned Rostec and Precision Instrumentation Systems.

The Russian Air Force will start operational testing of a new indigenous targeting pod before the end of the year. “We have held joint meetings with the developers and manufacturers of the pod and have agreed on deadlines,” a Russian defense official told the Russian-language daily Izvestia. “In accordance with the approved plans, we will test the first product before the end of this year.”

The new targeting pod—which will be fitted onto advanced Russian warplanes such as the Su-30SM, Su-35S, Su-34 and MiG-35—incorporated the typical features found on equivalent Western designs. It includes GLONASS satellite positioning, electro-optical/infrared imaging and laser designation capabilities. It also seems to have video downlink capabilities just like U.S. targeting pods. However, it remains to be seen if the new Russian pods offer the performance of their Western counterparts.

Russia seems to have accelerated the development of the new pod after combat experience in Syria demonstrated that such capabilities are mandatory over the modern battlefield. Indeed, Russian forces have been accused of being less than precise with their airstrikes in Syria—which could in part be ascribed to Moscow’s lack of targeting pods.

Until recently, Russia was not able to produce an indigenous targeting pod. Moscow had attempted to procure the Thales Damocles pod—and even hoped to license-build the French-developed sensor for a time—during the early 2000, but the effort fell flat. Meanwhile, Russia’s domestic industry—despite its best efforts—failed to develop an indigenous equivalent until now.

According to Izvestia, Russian industry made a breakthrough in manufacturing piezoelectric ceramic film strips less than 100 micron in width. That in turn led to a breakthrough in building targeting pods. While initially manufacturers like Zelenograd SRI ELPA had trouble producing the filmstrips consistently, eventually they resolved those problems.

That led to Precision Instrumentation Systems completing the first prototype targeting pods by the end of 2015. Production of the new pods is set to start later this summer, according to Izvestia. With the addition of the targeting pods, the Russian Air Force will more or less have matched all of the capabilities resident onboard U.S. fourth-generation fighter like the F-15, F-16 or F/A-18.