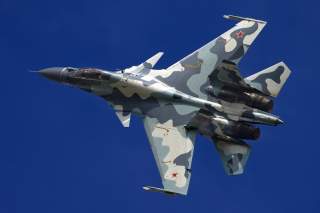 After two decades of neglect, the Russian air force is enjoying a petrodollar-funded renaissance.

But for all this modernization, there’s one big thing the Russian air force still can’t do.

Nearly 30 years after the United States and its closest allies ushered in an era of precision guided munitions, wherein almost every combat plane packs laser-, radar-, infrared- or GPS-guided bombs and missiles, Russia still lags behind in the development, acquisition and employment of such “smart” air-to-ground munitions — especially long-range ones.

“Certain categories are absent completely, such as precision-guided, air-launched stand-off missiles (in the class of the MBDA Storm Shadow and the Raytheon AGM-154 Joint Stand-Off Weapon) and satellite-guided bombs, despite the fact that such bombs have been tested successfully by the Russian military,” Alexander Mladenov writes in the current issue of Combat Aircraft.

Along the same lines, Moscow has failed to acquire targeting pods for its warplanes. Many other air forces use these sensor pods to find targets for smart weapons. But not Russia.