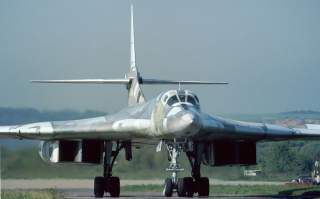 The Blackjack—which the Russians have nicknamed the “White Swan” due to its white anti-flash paint scheme and slender design—was the last strategic bomber ever developed by the Soviet Union. Though modern Russia has adapted the powerful long-range supersonic bomber for the conventional role, its original mission was to deliver a thermonuclear payload to the United States should the Cold War have turned hot. Effectively, it is Russia’s answer to the stealthy Northrop Grumman B-2 Spirit—the last American Cold War-era strategic bomber.

According to the Tupolev design bureau, the Soviets started designing the bomber in the early 1970s—shortly before the United States had started to develop the B-2. The preliminary design was more or less in place by the mid-1970s. The first prototype flew on December 18, 1981, with B.I. Veremey flying as the lead test pilot.

Tupolev started flight-testing the first production aircraft in October 1984 with the first operational bombers being delivered to the Soviet Voyenno-Vozdushnye Sily in in April 1987. The first operational Tu-160 bomber unit was the 184th Guards Heavy Bomber Regiment, which was based in Pryluky, Ukraine. The bomber regiment had nineteen out of the thirty-six Tu-160s built when the Soviet Union collapsed—which meant those jets belonged to a newly independent Ukraine.

The former Soviet republic eventually sold eight of those Tu-160s back to the Russian Federation in 1999, but the present day Vozdushno-KosmicheskieSily Rossii has only sixteen Blackjacks in service. The Ukrainians scrapped the remaining planes—but the newly independent country never had the resources to operate such a sophisticated warplane. The surviving Russian-owned bombers are being upgraded with new avionics and weapons.

Russia has indicated that it intends to restart production of the massive supersonic bomber at the Kazan Aircraft Production Association in 2023. Russia intends to produce more than fifty new Tu-160s—which would be built concurrently as the new Russian PAK-DA stealth bomber is being designed.  But, as always, there is the ever-present question of how Russia will pay for the new Blackjacks let along a new PAK-DA. “According to the plans, serial production of the aircraft [Tu-160] new version is to be implemented starting from 2023,” Russian deputy defense minister Yuri Borisov told reporters during a visit to the Kuznetsov factory. “The PAK DA project will be somewhat shifted beyond [2023], otherwise there is no sense in it.”

The new Blackjack variant would be called the Tu-160M2. While the airframe is likely to remain more or less similar, the Russians have indicated that the avionics, mission system and potentially the engines would be completely revamped. “There will be nothing left from the earlier version of Tu-160, only the platform. Much more advanced hardware will be installed on it,” Vladimir Mikheev, a senior official with Russia’s Radio-Electronic Technologies Concern told the Rossiyskaya Gazeta.

While the B-2 is relies on stealth—the Tu-160 relies on a combination of blistering speed and long-range standoff cruise missiles to deliver its payload. The Blackjack can sustain speeds of Mach 2.05 with its four massive Kuznetsov NK-32 afterburning turbofans, which provide 55,000lbs of thrust each at maximum power. However, operational Blackjacks are currently restricted to about Mach 1.5 in order to save airframe life.

The basic concept behind the Tu-160 is to use its speed to move into launch position quick and disgorge its cruise missiles before the enemy can react. Indeed, U.S. Air Force and U.S. Navy pilots told me that intercepting a high flying and fast flying target at Mach 2.0 or more is extremely difficult even for a high performance fighter like the F-15C Eagle.

The Tu-160’s primary armament comes in the form of twin six-shot rotary cruise launchers that fit inside its cavernous weapons bays. The most common weapon for its strategic deterrent role is the 1,600 nautical mile-range Raduga Kh-55 nuclear-tipped cruise missile. But there is also a conventional version of the weapon called the Kh-555. But those weapons are slated to be replaced by stealthy new cruise missiles—which until recently were not thought to be operational.

However, recent video footage released by the Russian defense ministry indicates that Russian Tu-160 crews recently launched the stealthy new Kh-101 cruise missiles against targets in Syria. That likely means the Kh-102 nuclear-tipped variant is also operational with the Russian air force. The addition of those new weapons means the Tu-160 remains an extremely formidable enemy. In total, the Tu-160 can carry a whopping 88,000lbs of roughly the weight of a fully loaded F-15E. Its max takeoff weight is an astounding 606,000lb, which means it is the largest operational warplane ever built.

While the Tu-160 is the Russian answer to the American B-2, the aircraft was designed to operate using a completely different concept of operations. The B-2 was designed to penetrate deep into enemy airspace—the Blackjack was always designed as a standoff launch platform. It’s not a direct equivalent.

With a stealth aircraft, the platform is extremely expensive while the munitions can be cheaper. With a standoff platform, the aircraft is less expensive while the weapons have to be much more sophisticated. Both are effective methods to deliver weapons on target. Hopefully, we will never find out which is a better nuclear delivery method.