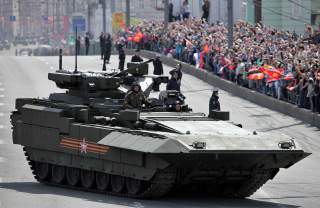 Though the focus is often on the T-14 main battle tank version of Russia’s new Armata series of armored vehicles, the T-15 heavy infantry fighting vehicle (IFV) is in many ways a revolutionary innovation.

Built on a common chassis with its main battle tank stable mate, the T-15 is equipped with nearly the same level of protection as the T-14. That means that it can fight alongside main battle tanks and go toe-to-toe with enemy armor with its anti-tank guided-missile armament.

The key features of the T-15 is the Afghanit active protection system (APS), Malachite explosive reactive armor, slat armor and a passive armor matrix that is very similar to the T-14 main battle tank variant and indeed across the entire Armata family. As Dmitry Yurov, a defense reporter with the Russian Defense Ministry’s Zvezda TV channel, the T-15 will completely rewrite Russia’s armored warfare doctrine.

While in previous years Russian infantry fighting vehicles were primarily used to provide fire support and cover for the infantry, the T-15 will be able to engage enemy tanks “gun for gun”—as Yurov puts it. As such, the Russians expect to put the T-15 to fight alongside the T-14 in the same units against other armored formations. But while there is some debate within Russian analyst community as to the necessity for such a heavily protected IFV—the T-15 is heavier than a T-90—the Russian military seems to have decided that such a vehicle is a requirement. “Such was the demand of the customer—the Ministry of Defense,” Yurov writes.

However, there are some potential drawbacks for having an active protection system installed on an infantry fighting vehicle. The APS could potentially injure or kill soldier who are operating near the vehicle when the system is active. The Russians have apparent solved the issue, but their solution to the problem is classified. “The situation solved comprehensively,” Yurov writes—citing an unnamed source.

For Western armies, the Armata series—and particularly its active protection system—could prove to be worrisome. The Russians claim that the Afghanit is effective against even kinetic energy rounds—which many Western experts find to be a dubious claim—but nonetheless, the system might prove to be a formidable challenge to overcome.

Indeed, some analysts expect direct fire weapons will become increasingly necessary to take-on the Armata series. “Most revolutionary is the Armata-based T-14 Main Battle Tank featuring an uncrewed turret. There is emphasis on protection across the platforms—including active protection systems (APS)—reflecting lessons learnt as well as perceptions of future operating environments,” states the Military Balance 2016 report by the International Institute for Strategic Studies. “When it enters service Armata will be the first tank designed for an unmanned turret and APS. Successful fielding of APS will reduce the effectiveness of anti-tank guided missiles and shoulder-fired weapons such as rocket propelled grenades. This will change battlefield dynamics by increasing the importance of cannon, anti-tank guns and tanks.”