The Russian Military's Super Weapon of Choice: The 'Big Guns' 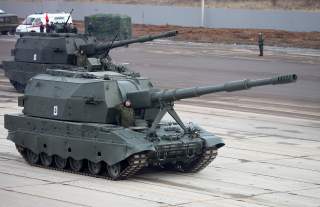 One of the most characteristically Russian methods of warfighting is the heavy use of artillery. In Syria, Russian artillery gave a boost to a Syrian army badly depleted by years of heavy fighting. In eastern Ukraine, combined Russian-separatist forces continue to exchange artillery fire with the Ukrainian army on a regular basis.

During the battles of Ilovaisk and Debaltseve, Russian and separatist artillery massacred cut-off Ukrainian troops in two of Kiev’s worst defeats in the war.

Over the weekend of Jan. 28, 2017, Russian-separatist artillery pounded Ukrainian troops in the worst fighting in months — “using all the might of their arsenal along all front lines,” the Ukrainian military stated according to the Financial Times.

Russian-backed separatists, however, claim they’re fighting back against a Ukrainian offensive. Indeed, there does appear to be a slow-motion Ukrainian offensive aimed at carving bits of separatist-controlled territory away, piece by piece, according to Radio Free Europe/Radio Liberty’s Christopher Miller.

“Observers say the Ukrainians appear to be trying to create new facts on the ground, while officials and commanders insist they are fighting to stop the flow of contraband into separatist-controlled territories,” Miller wrote.

“For the last two days, the Russian occupation forces carried out massive attacks across the contact line using all available weapons,” Ukraine’s envoy to the United Nations stated on Jan. 30. The weapons included “MLRS ‘Grad,’ artillery of 152 mm and 122 mm, mortars of 120 and 82 mm, tanks, all prohibited by the Minsk agreements, and small arms.”

The heavy use of artillery reflects the fact that Russia models its army to be artillery-centric, and it shares that doctrinal philosophy — not to mention the weapons themselves — with its proxies in Eastern Ukraine.

It’s also a doctrine that derives from the particular environments in which Russia fights its wars, and is a tradition that developed first in Imperial Russia and honed by the Soviet Union during World War II, when the Red Army carried out the largest artillery bombardments in history in the Seelow Heights and the Karelian Isthmus.

“The Soviet army was an artillery army with many tanks. The Soviets structured their army around artillery,” analysts Lester Grau and Charles Bartles wrote in The Russian Way of War, a recent book-sized study of the Kremlin’s ground forces.

That legacy continues today. Not only does Russian doctrine call for relatively large numbers of artillery, but much heavier concentrations of firepower aimed at annihilation — уничтожение — of enemy units with mathematical precision … when the circumstances call for it.

“Much of the terrain in which Russia may fight is fairly flat; consequently, it is difficult to get forward observers into good positions to spot artillery targets,” Grau and Bartles, analysts at the U.S. Army’s Foreign Military Studies Office, note in their study.

We can see the results of that in Ukraine. Note that the Ukrainian military is a former Soviet force, too, and thus similarly relies upon artillery in large amounts.

Russia’s artillery is also still rather old fashioned, and the Kremlin has been slow to adopt precision-guided rockets and shells partly out of concern that jamming can interfere with their electronic fuses, according to Grau and Bartles. Another issue is that fancy equipment is expensive, and Russia — despite breathless media reports about its latest hardware — still takes a cautious approach to new weapons.

Think of it more as an evolutionary approach to building an army. The authors note that Russia tends to keep equipment in service for much longer periods than the U.S. Army, preferring instead to “refurbish this equipment at a fraction of the price of purchasing new systems.”

The weapons are still useful, after all, especially when fired en masse. The Kremlin can then augment its artillery with a smaller number of modern weapons and cheap reconnaissance drones.

One of these newer weapons is the 2S35 Koalitsiya-SV — a 152-millimeter tracked howitzer based on the T-90 tank chassis. In addition to firing precision-guided munitions, the howitzer has several improvements over its predecessor — the Msta-S — involving the automation of key systems.

But for the most part, Russia sticks to what it knows and does best — and tries to do it relatively cheaply.

And the most significant improvements since the Cold War have not been in the guns themselves, but the intelligence, reconnaissance and fire planning systems that help the guns hit their targets — and which Russia has put to work to deadly effect in Ukraine.