The Russian Navy Has Been Missing One Critical Capability (Until Now) 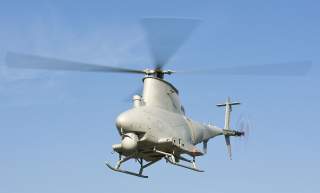 The Russian Navy is developing a new rotary wing unmanned aircraft for its ships. The unmanned helicopter will be used for intelligence, surveillance and reconnaissance (ISR) as well as targeting. The Russians have been somewhat lagging in the development of unmanned systems, which are increasingly becoming commonplace in most western militaries.

There are no further details available about the Kremlin’s new project, but it could increase the organic ISR capabilities of Russian surface combatants in the same way as Northrop Grumman’s MQ-8B and its larger MQ-8C Firescout unmanned helicopters do for the United States Navy.

The MQ-8B version of the Firescout is deployed on the U.S. Navy’s Littoral Combat Ship to provide long-range surveillance capabilities. Earlier this year in October, USS Coronado (LCS-4) deployed to the Pacific with two MQ-8B Firescouts onboard. The helicopters were equipped with the Telephonics AN/ZPY-4(V)1 radar, which can track up to 200 targets with its surface search. It can perform terrain mapping and other functions—affording the diminutive ships a significant reconnaissance capability. In the future, the MQ-8B will also carry mine-hunting equipment.

The U.S. Navy is also planning to buy 96 of the larger and more capable MQ-8C Firescout variant—which is based on the Bell 407 helicopter. Northrop Grumman started to deliver the first operational MQ-8Cs to the Navy in December 2014. Northrop describes the Firescout as “a combat proven, unmanned helicopter system that provides real-time Intelligence, Surveillance and Reconnaissance (ISR), target-acquisition, laser designation, and battle management to tactical users without relying on manned aircraft or space-based assets. Fire Scout has the ability operate from any air-capable ship or land base in support persistent ISR requirements.”

While there are no details available about the new Russian project, it is likely that Moscow’s concept for their unmanned naval ISR helicopter will be similar in some respects. The Russians likely have similar needs for organic ship-based ISR and targeting. It’s difficult to assess where the Russian program is in terms of its development since there are so few details available, however it is clear Moscow is investing in new technologies in order to try keep pace—or catch up to—the West.

The Russians have the engineering skills to develop an effective unmanned rotary wing system, the real question is if the Kremlin will have the funding available to see the project through. Only time will tell.