The Russian Navy Report You Missed (But Need to Read, Now) 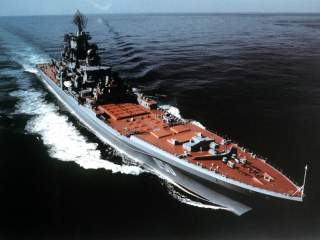 After its near collapse in the 1990s following the Soviet Union's demise, the Russian navy is now on a path towards recovery.

While the Russian navy is between one-sixth to one-quarter of the size of the once-mighty Soviet fleet, Moscow has used the lean years immediately following the Cold War to focus on quality over quantity, according to a new report from the U.S Navy’s Office of Naval Intelligence (ONI). But the Russian navy urgently needs to build more ships or risk essentially “disappearing” in the 2020s.

“In the next 10–15 years, the Russian Navy will continue its historic transition to a new 21st-century navy. A modest number of new class ships and submarines will enter the Navy by the turn of the decade,” reads the ONI report. “Continuing series construction and the start of several more sophisticated and complex new classes are projected for the next decade. The new construction will be accompanied by the maintenance and extension in service of the most capable Soviet legacy units,” the analysis adds.

But while the Russian navy will continue to field ever more capable ships, submarines, aircraft and weapons, it needs to increase its build rate. It is "imperative" for the Russian navy to address this problem, the report notes, "in order to avoid disappearing in the 2020 timeframe.” Moscow's plans to avoid this fate, again, call for quality over quantity: “The future 21st-century Russian Navy is projected to be more capable on a unit-by-unit basis than at present but not significantly larger in overall order of battle numbers,” the ONI report assesses.

In terms of hardware, the report includes little that was not previously known—but there were are a new few revelations.

"A design development program, covername Lider [Leader] and possibly Design 23560, is underway to replace the aging UDALOY and SOVREMENNYY class inventories. Depending on propulsion type, the design could be a 8,000 to 18,000 ton ship combining both destroyer and cruiser characteristics with robust air, surface, and submarine warfare, as well as anti-missile defense capabilities. Russia reportedly intends to build six such ships for both the Northern and Pacific fleets (12 total). The lead unit is not likely to be built earlier than the mid-2020s. Press reports have mentioned that the propulsion for this class, whether conventional gas turbine or nuclear, is not yet determined. The resolution may depend on decisions yet to be made regarding a new aircraft carrier which, if built, is likely to be nuclear-powered."

"In early 2006, then Russian Navy Commander-in-Chief Admiral Vladimir Masorin discussed the future composition of the Russian submarine force. As part of this force, he noted that a nuclear submarine of an unknown type was currently under development. Speaking later, Rear Admiral Shlemov in charge of naval shipbuilding expanded on this, highlighting that this new type submarine would have a displacement of 5,000–6,000 tons. This new, smaller submarine’s main mission would be the protection of the DOLGORUKIY Class SSBN, allowing the multi-mission SEVERODVINSK to perform other navy missions. As of 2006, both the Rubin Design Bureau and Malakhit Design Bureau were said to be interested in undertaking the design of this submarine. The general designer of the Rubin Bureau has reiterated the requirement of future Russian submarines to be smaller in displacement. However, there has been no further public discussion of the design or announcement that a final design has been approved. Based on typical timelines for submarine development, a launch prior to 2020 is unlikely."

"Work on a future non-nuclear submarine, design covername Kalina, has been announced with work underway at the Rubin Design Bureau. It is expected to have an airindependent propulsion plant (AIP). Laydown of the lead unit is projected soon after 2020. Unlike the case with submarines, the Navy approached the recapitalization of its surface fleet starting with smaller sized units and progressively building larger ones."

"Vice Admiral (retired) Anatoliy Shlemov, of the United Shipbuilding Corporation, spoke to design progress as of 2009 on a future aircraft carrier program. Russian designers are currently working on the aircraft carrier’s requirements and tactical-technical tasks. This preliminary design work is being conducted by the Neva Planning and Design Bureau in conjunction with the Krylov State Scientific Center in St. Petersburg, which also designed the previous KIEV and KUZNETSOV Class carriers. A model of a new carrier, preliminary Design 23000 covername Shtorm (Storm), was displayed at the International Maritime Defense Show in St. Petersburg both in 2013 and 2015. Very preliminary published characteristics reveal that the new aircraft carrier will carry a new generation of jet fighters and unmanned aerial vehicles (UAVs). Unlike the KUZNETSOV CV that was built with 12 SS-N-19 anti-ship cruise missiles, the new carrier will not carry surface-to-surface cruise missiles. Its propulsion plant would be nuclear-powered, providing the ship with a full power speed around 29 knots. At least three nuclear-powered aircraft carriers have been discussed; one for the Northern Fleet, one for the Pacific Fleet, and a third hull—a replacement carrier—would be undergoing scheduled repairs. Former Navy CINC Vladimir Masorin stated in 2007 that six aircraft carriers would be necessary, three each in the Northern and Pacific Fleets: one active, one in training, and one in maintenance. Construction of a new CV poses a challenge for Russia. The KIEV and KUZNETSOV Class carriers were built at Chernomorskoye Shipyard in Nikolayev, Ukraine, now unavailable to the Russians. Two shipyards in Russia that could solicit such a contract are the Baltic Shipyard in St. Petersburg and Sevmash Shipyard in Severodvinsk. These two shipbuilding enterprises reportedly have requested to be retooled and reequipped. They also want new technologies to be introduced in order to increase their plant’s production efficiency. However, there have been plans to close Baltic Shipyard by the 2020s and ambitious shipyard development plans for Sevmash have been discussed. In addition to manufacturing issues, the Russian Navy will have to solve issues of basing, support, new frigate/destroyer escorts, training, and billeting for thousands of carrier crew members. Although recent statements by the naval leadership continue to promote the construction of aircraft carriers, it is likely that there will be extensive discussion and debate before final decisions are made. In light of the extensive work required to enable Russia to build an aircraft carrier, construction is not likely to begin until about the mid-2020s."

Investment in lasers and rail-gun technology.

"Russia’s directed energy weapons program utilizes radio frequencies in order to use electromagnetic energy to damage or disrupt electronics. The lasers use a high-intensity light to disrupt sensors and thermally damage structures. Low-energy devices are already being completed for use in electro-optic countermeasures. Russia’s long-term goal is a high-energy weapon with anti-satellite and cruise missile defense capability. Russia maintains a mid-term high-energy system of chemical and gas lasers and solidstate lasers as medium-energy systems. The development trends of radio-frequency weapons are based on the observed effects with little modeling or simulations. Different waveforms are being utilized, including ultra-wide band and complex waves. Their capabilities are yet to be fully evaluated; problems such as system life and targeting are still key challenges. The other challenge for Russia is weaponization. This involves combining the beam into a solid state, which is dependent on its quality as well as atmospheric compensation. These systems require a high quality of manufacturing using mirrors, lenses, and exotic laser materials like diodes and non-linear optical crystals."

"Electro-dynamic gun systems are being developed that use electrical energy for 2,000+ m/s muzzle velocity. The near- and mid-term combustion-based technologies are a transitional step to the creation of a railgun. The major issue for Russia is maintaining rail life through material science, transition management, and rail geometry. Another continuing issue remains pulse power. To increase and maintain pulse power, Russia’s new developments comprise of capacitor inductors, rotating machines, and flux compression generators. Non-traditional designs of the system include reconnection launchers and linear accelerators."

A drive towards a professional force.

"The Russian military is currently reorganizing its personnel structure to more accurately reflect the needs of modern warfare. The goal of a professional, volunteer-based, highly skilled military is augmenting the traditional obligated service conscription system for all males between the ages of 18 to 27. The military is also looking to develop a new curriculum for educational institutions involved in training young men for military service in order to combat a prevailing negative attitude toward the service."

Overall, Russia has begun to make large strides in fielding a twenty-first century navy, which will be capable of providing layered national defense, an impressive but limited power projection capabilities—especially compared to the Soviet fleet—and will be manned by a professional crew. In some ways, it could be even more of a threat than its Soviet predecessor.