The Russian Navy's Master Plan to 'Sink' the U.S. Navy Is Now Clear 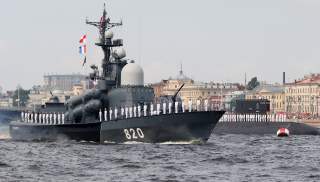 “The Navy General Command will particularly focus on forming strategic non-nuclear deterrence groups that will include vessels armed with long-range precision weapons, as well as on improving the system of naval bases and ensuring balanced supply of weapons and munitions,” Commander-in-Chief Admiral Vladimir Korolyov told the TASS news agency.

The shift is a significant departure from previous policy, notes former Soviet and Russian arms control negotiator Nikolai Sokov, now a senior fellow at the James Martin Center for Nonproliferation Studies at the Middlebury Institute of International Studies at Monterey.

“From a broader perspective this looks like a significant development because historically the Russian Navy has been the greatest proponent of nonstrategic nuclear weapons: they said they cannot face US Navy without them,” Sokov told The National Interest.

“Now they not only have new weapons, but, more importantly, a new mission; new and more capable weapons will emerge eventually. Moreover, weapons are usable and, perhaps even more importantly, can be deployed on a broad range of platforms, including those that have never carried nuclear weapons (big help to the Russian naval program– small vessels can be very tangible and it’s easier to cut funding for big-ticket items).”

However, while the new Russian development is significant, Moscow will still rely on its nuclear forces to some extent.

“This is part of an overall Russian strategy to bolster its conventional deterrence, and ability to retaliate with long range conventional weapons,” Michael Kofman, a research scientist specializing in Russian military affairs at the Center for Naval Analysis, told The National Interest. ”However it does not obviate the Navy's role in escalation control with non-strategic nuclear weapons as clearly stipulated in the naval doctrine signed in 2017.”

Indeed, all of Russia’s new long-range precision-guided weapons are dual nuclear and conventional capable weapons. “The missiles are the same, the difference is solely in the payload,” Kofman said. “You can logically assume that nuclear-tipped missiles will have substantially longer ranges.”

Moreover, there are differences between how arms control negotiators and the military definite terms such as non-strategic and strategic. “When discussing the non-strategic nuclear component of Russian nuclear forces, it’s important to keep in mind that military definitions are not the same as legal ones,” Sokov said. “Long-range intermediate-range assets are often regarded as strategic because of their mission. Short-range intermediate-range can be lumped together with tactical for warfighting, battlefield missions. That is, Russia will likely continue to value higher-end nonstrategic, both nuclear and conventional, and discount nuclear short-range. The latter, in my view, have never had much role in Russian nuclear strategy.”

However, Russia’s new long-range conventional strike weapons are not purely for deterrence. The missiles can be used for power projection purposes as they were over Syria. “Deterrence missions should not overshadow what we saw in Syria,” Sokov said. “Kalibrs were used to support policy with considerable success. Although Russian Navy does not talk about it, I see that as a more tangible mission in the foreseeable future. Actual use will be rare and perhaps not in the near future, but demonstration of capability to use will be employed quite extensively, in my view. That is, one of the main missions for Navy will be support of Russian foreign policy with military power.”

Russia, however, must invest in developing a much more in developing a robust kill-chain for its new conventional deterrence capability. “In order to improve the credibility of their conventional deterrent, Russia will have to invest much more heavily into capacity, and the targeting required for long range precision weapons,” Kofman said. “Both will be priorities in the upcoming state armament program of 2018-2027.”