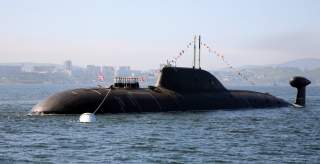 The Kremlin’s submarine fleet is starting to receive upgraded torpedoes according to Russian naval officials.

The new weapons will equip both nuclear and diesel-electric submarines. However, it is not clear if the Russians are building both 533mm and 650mm versions of the new torpedoes. Russian submarines are often equipped with torpedo tubes of both diameters.

“Along with the development of new types of seaborne underwater weaponry, new diesel-electric submarines and nuclear-powered underwater cruisers have been armed with torpedoes featuring improved combat characteristics since 2016.” Rear Admiral Viktor Kochemazov, Russian Navy combat training chief told the Russian media outlet Red Star according to TASS. “In this sphere, we are not behind NATO countries and are outperforming them by some characteristics.”

U.S. Navy sources told The National Interest that the Russian assessment might not be inaccurate. Russian and the Soviet Union before it made excellent torpedoes. Indeed, Russian-made wake-homing torpedoes—which are cannot be decoyed by standard countermeasures—are among the threat U.S. Navy planners fear the most.

Since the collapse of the Soviet Union in 1991, the United States Navy has severely neglected anti-submarine warfare and has not paid as much attention to developing modern torpedoes. Essentially, the U.S. Navy took sea-control for granted during the past 25 years. As a result, Russia and other great powers have caught up and may have even exceeded the capabilities of the U.S. Navy’s latest Mk-48 ADCAP Mod 7.

The U.S. Navy recently restarted production of the Mk-48 after a long hiatus and has start to prototype a new version of the torpedo. The new upgraded version of the Mk-48 ADCAP Mod 7 should be better able to compete with modern Russian and Chinese torpedoes. However, the bottom line is that the U.S. Navy is scrambling to rebuild its abilities to defeat enemy submarine after more than a decade of neglect.