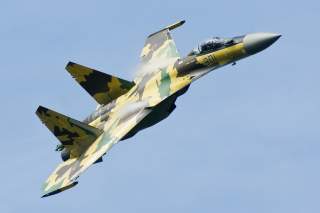 Russia appears intent on selling China its most advanced fighter jet by the end of the year, a move that will greatly enhance Beijing’s ability to project military power in the South China Sea.

Speaking to reporters at the Paris Air Show this week, Yuri Slyusar, chairman of United Aircraft Corp, a Russian civilian and military jet manufacturer, said his company is aiming to ink a deal with China to sell Beijing 24 Su-35 fighter jets.

“Our position is that we still believe that we will sign the contract to sell 24 aircraft this year,” Yuri said, according to multiple Western defense news outlets. He added that the decision would have to be approved by the “federal service on military cooperation.”

China and Russia have been in negotiations for years over the potential sale of the Su-35, which Moscow refers to as a 4++ generation multi-role fighter jet. The talks have bogged down over Russia’s fears that China will reverse engineer the plane in order to produce a domestically-built version, something that China has done with previous Russian aircraft like the Su-27.

There have also been reports that Moscow is concerned Beijing only wants to buy a small number of Su-35s in order to reverse engineer the jet’s NIIP Irbis-E passive electronically scanned array radar and 117S engine, which China could then use on domestically-produced planes.

As such, Russia has long held that China must purchase a large batch of the planes in any initial sale, so Moscow can receive enough financial compensation to make the deal worthwhile even if China steals the jet or its technology.

However, last year, as tensions between Russia and the West increased over Ukraine, Moscow softened its position. In November 2014, IHS Jane’s reported, citing Russian defense industry sources, that Moscow was only asking Beijing to purchase 24 Su-35s, not the 48 jets it had previously demanded.

At that time, the Russian side indicated that the sale of the Su-35s was imminent. One Russian industry source told Jane’s “I think that the contract will be signed at the end of 2014 or at the beginning of 2015. There are no obvious political or technical reasons hindering the signing of the contract. The only thing to be done is the elaborate consideration of some details and technical issues.”

He added: “I am convinced that if everything is carried out in the proper way, Chinese pilots will be conducting flight demonstrations in 2016.”

It’s unclear why talks seemed to stall again. One possibility is that last month China conducted the first flight test of an upgraded J-11B fighter jet. Although the J-11 is a copy of Russia’s Su-27, the upgraded version—called the J-11D—features advanced Active Electronically Scanned Array (AESA) radar. As such, some analysts compared the J-11D to the Su-35.

Still, as The National Interest noted at the time, the J-11D is unlikely to stop China from buying the Su-35. For one thing, the Su-35 is believed to be capable of defeating fourth-generation fighter jets like the F-16 and F-15 Eagle.

As Air Force Technology has noted the Su-35 “has high manoeuvrability (+9g) with a high angle of attack, and is equipped with high-capability weapon systems that contribute to the new aircraft's exceptional dogfighting capability. The maximum level speed is 2,390km/h or Mach 2.25.”

Equally important from China’s perspective is that the Su-35’s high fuel capacity and long range would greatly enhance China’s ability to enforce its claims in the South China Sea. Currently, Beijing has trouble maintaining a regular presence over the enormous waters, which are roughly 1.4 million square miles (2.25 million square kilometers).

As Peter Wood has written in The Diplomat:

Currently, land-based PLAAF fighters, can conduct limited patrols of the sea’s southern areas, but their fuel capacity severely restricts the time they can spend on patrol. Enforcing claims far from the mainland in times of crisis requires the type of range and speed that the Su-35 possesses. The Su-35 is likely meant to help enforce China’s territorial claims, further deter regional claimants, and provide additional layers of protection in the case of escalation.

Wood notes that the “key to this is fuel,” and the Su-35 offers a number of advantages over the Su-27 in this regard.

“One important improvement of the Su-35 over the Su-27/J-11B is the ability to carry external fuel tanks, be a major factor limiting the Su-27, which does not have aerial refueling capability. This is in addition to a 20 percent increase in fuel capacity over the Su-27 and air refueling capability. This later capability is another important part of China’s strategy of increasing loiter times and distances,” Wood wrote.

The Su-35 also compares favorably with the J-11D in terms of internal fuel capacity. Whereas the J-11D can only carry 9 tons of fuel, the Su-35’s internal capacity is around 11.5 tons.