The Scariest Thing North Korea Could Ever Do: Sell a Nuclear Weapon 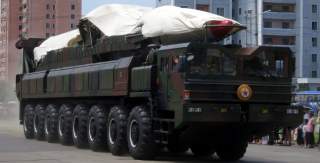 As North Korea’s economic position worsens, the risk that it sells its nuclear weapons technology grows. Pyongyang conducted its fifth nuclear test on 9 September, accompanied by claims it has developed a warhead that can be mounted onto rockets. This test is estimated to have been at a yield of 25–30 kilotons — significantly larger than previous tests.

While the magnitude of the test alarmed some US policymakers, Washington’s foreign policy remains focused on the Middle East. Similarly, North Korea’s subsequent missile tests that ended in failure on 15 and 20 October gained little attention.

There appears to be a de facto acceptance by some in the Obama administration that North Korea will not agree to denuclearize — regardless of the concessions. Earlier this month, Obama’s top intelligence chief, James Clapper, remarked at an event hosted by the Council on Foreign Relations that “the notion of getting the North Koreans to denuclearize is probably a lost cause.” Despite Clapper’s remarks, the Obama administration as a whole continues to insist that a nuclear North Korea is not an option regardless of their unwillingness to disarm.

Meanwhile, concerns remain about the possible transfer of North Korea’s nuclear technology and knowledge to non-state actors. Hillary Clinton considers their “quest for a nuclear weapon” a grave threat because “the greatest threat of all would be terrorists getting their hands on loose nuclear material.” So how likely is North Korea to engage in a nuclear arms sale with a terrorist group?

Up until this point, proliferation of North Korea’s weapons of mass destruction seemed to be restricted to sovereign states. But this has not stopped apprehension from some in the intelligence community — spurred by Pyongyang’s connections to Libya’s Gaddafi regime and ties to Syria’s failed nuclear weapons program.

Over the years North Korea has created a web of foreign connections to peddle its missiles and components. As talks on denuclearization remain non-existent and foreign sanctions against the regime tighten, there are startling concerns that a cash-strapped Pyongyang may resort to dealing with its finances through the black-market with terrorist groups or organized crime syndicates.

While the threat may seem fanciful — even for a state as repugnant to international rules as North Korea — the risks are real. The official and unofficial transfer of nuclear technology has always been a method of global outreach for North Korea. Nuclear proliferation to non-state actors is a viable option for this regime when it feels threatened, economically cornered and politically unstable. Pyongyang is strapped for funds despite China’s less than ideal compliance of UN sanctions — which has kept the little trade they have alive and enabled the state to continue to obtain materials and funds for missile tests.

As tougher sanctions are imposed, North Korea will be pressured into securing funds via alternative channels. When the state’s cash flows and resources dry up, selling nuclear technology to the highest bidder may become a tantalizing option for the Kim regime.

In order to prevent such a possibility, the current counter proliferation instruments in place —such as the Proliferation Security Initiative — need to be bolstered by further actions. First, the international community should urge China to fully implement sanctions on North Korea with close observation on the movement of fissile materials across the Sino–North Korean border. An example of this initiative would look like the joint Sino–US probe on the case of Liaoning Hongxiang Group’s extensive trade that allegedly included materials that could be used in the production of nuclear weapons.

Second, the global intelligence community should collaborate and share information regarding the North Korean migrant workers that are spread out across the world — particularly in Russia and the Middle East. They may be the ones who can be incentivized to act as intermediaries for the exchange of North Korea’s nuclear secrets for money. Tracing the potential roots of North Korea’s nuclear transactions through their migrant workers would be the easiest method of detection.

Adequate attention should be given to the potential transfer of weapons of mass destruction technology. This should be in conjunction with information sharing in the intelligence community about Pyongyang’s connections to terrorist groups in order to ensure North Korea does not head down an even more dangerous path.