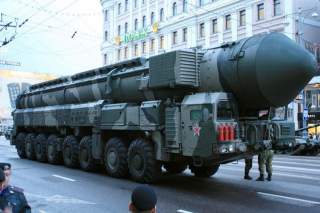 Russia faces real challenges in sustaining its military modernization efforts, given low oil prices, Western sanctions and the cost of operations in Ukraine and Syria. Despite that, Moscow looks set to continue the program. At its heart is nuclear weapons modernization. Russia’s most recent military doctrine, released in 2014, continues to emphasize the primacy of nuclear weapons in Russian defense policy, stating:

"Russia reserves the right to use nuclear weapons in response to a use of nuclear or other weapons of mass destruction against her and (or) her allies, and in the case of an aggression against her with conventional weapons that would put in danger the very existence of the state."

Three developments suggest a willingness by Russia to use nuclear weapons in response to non-nuclear attacks in a manner that lowers the threshold of nuclear war. First, the concept of preventative de-escalation is important. A recent IISS analysis explained de-escalation in which limited nuclear war could be used to:

"…de-escalate and terminate combat actions on terms acceptable to Russia through the threat of inflicting unacceptable damage upon the enemy. Such limited nuclear use may deter both nuclear and conventional aggression."

Second, the integration of conventional pre-nuclear and nuclear forces reinforces Russia’s coercive power against NATO in the pre-war ‘Phase Zero’ in a future regional crisis—for example, in the Baltics. And third, the Russians are clearly conscious of that coercive power given their recent nuclear signalling that suggests Russia continues to see such weapons as a means of national strength. Russia has undertaken sabre rattling through simulated nuclear strikes in large-scale exercises and aggressive probing of NATO airspace with nuclear-capable bombers. It has demonstrated the dual-role Kalibr NK sea-launched cruise missile in deadly strikes against Syria, and deployed dual-role Iskander short-range ballistic missiles into Kaliningrad in a manner that was highly threatening to NATO. That has been backed by public statements which reinforce Russia’s nuclear weapons capability and even explicit nuclear threats to NATO states, notably Denmark.

Russian nuclear forces are being swiftly upgraded with the focus on ICBM modernization, based on introducing the SS-27 ‘Yars’ road-mobile missile, and from 2018 the silo-based RS-28 ‘Sarmat’ heavy ICBM. Yars and Sarmat replace much of Russia’s aging Soviet strategic rocket forces with significantly more capable delivery systems. Russia’s Navy is transitioning to modern Sineva and Bulava sea-launched ballistic missiles, on the modern Borei class SSBNs, while the Russian Air Force is restarting the Tu-160 Blackjack production line to produce the updated Tu-160M2 bomber that eventually will be complemented by the ‘PAK-DA’ advanced bomber sometime in the 2020s.

The strategic nuclear force modernization is important but it’s the integration of Russia’s conventional pre-nuclear forces with its large ‘non-strategic nuclear forces’ that’s of greatest significance. That’s shaping Russian thinking on the use of nuclear weapons, particularly during Hybrid Warfare, in a way that makes the risk of a crisis with Russia much more dangerous. Russia is increasingly focusing on the use of its nuclear forces to enhance its ability to undertake military adventurism at the conventional level in a manner that’s highly threatening to NATO. However the reliance on nuclear signalling, the changing operational posture of dual-role forces and concepts like ’preventative de-escalation’, increases the risk of miscalculation in a crisis that could lead to an escalation through the nuclear threshold.

Russia’s thinking on nuclear weapons contrasts with deliberate and explicit moves to diminish the role of nuclear forces by the US and its NATO alliance partners in recent years. For example, the Obama administration’s 2010 Nuclear Posture Review (NPR-2010) adjusted negative nuclear security assurances to reduce the role of nuclear weapons in responding to non-nuclear attack, and alluded to an eventual goal of ‘…making deterrence of nuclear attack on the United States or our allies and partners the sole purpose of US nuclear weapons.’ There’s also continuing debate over whether modernization of ageing NATO non-strategic nuclear forces via the B-61-12 tactical bomb is justified given NATO has moved away from heavy reliance on tactical nuclear forces since the end of the Cold War.

Certainly NATO states may see nuclear weapons as a tool for deterrence and (as noted in NPR 2010) only to be used in ‘extreme circumstances to defend the vital interests of the US and its allies or partners’. From Moscow’s perspective though, the integration of modernized conventional pre-nuclear and non-strategic nuclear forces is a means towards greater operational flexibility at the conventional level—as in a crisis over the Baltic States. Russia may feel that through implicit and explicit nuclear threats, and a lowering of the nuclear threshold in terms of operational use, it can have greater flexibility at the conventional level, with both general forces and ‘pre-strategic’ non-nuclear forces. NATO must decisively respond to that challenge and shift towards a stronger conventional and nuclear deterrent capability in Europe.