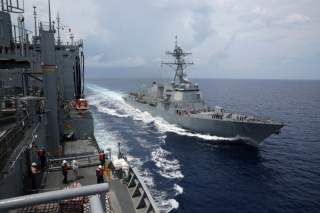 Has there been a recent shift in China's maritime strategy in the South China Sea? Has Beijing tempered its land reclamation and island building campaign, choosing to highlight positive aspects of its maritime security conduct? Is the PLAN becoming more accepting of the realities of the South China Sea, recalibrating its strategy to emphasise a more passive and benevolent presence?

In a recent Lowy Institute Report, Rory Medcalf and Ashley Townshend point to an interesting evolution in China's maritime thinking. The duo contend that not only has China turned more conciliatory in its maritime policy, Beijing is now advocating confidence-building measures that until recently it had refused to consider, helping lower the risks of maritime incidents, miscalculations and accidental conflict. Yet this behaviour is also facilitating what the authors say is a form of 'passive assertiveness' that challenges Asia's maritime status quo.

The authors note that while China's creation and militarisation of disputed islands, its establishment of new zones of military authority, and its conduct of expansive patrols in the East and South China Seas are tactically non-threatening, these actions represent a long-term strategic challenge to the regional order. Beijing's new strategy, Medcalf and Townshend point out, forces regional states to assume a degree of cost and risk in assessing China's latent aggression, complicating their strategic calculi and leading to ineffective responses.

What is needed, the authors recommend, is a prudent balance between the 'open display of tactical resolve and the pursuit of other indirect strategies' to shape Chinese behavior in ways that minimise the risks of escalation. Doing so, they say, needs a multidimensional international effort, one that is likely to impose costs on Beijing even as it offers incentives linked to its 'reputational, strategic, and economic interests'.

This is an insightful report on China's contemporary maritime behaviour and it makes some useful observations. Despite its informed assessments about China's revised maritime posture in the Pacific littorals, however, it overlooks some critical political and maritime developments, which suggest Beijing's recent maritime turn is more in the nature of a 'strategic pause' marked by a political expediency rather than a considered re-calibration of national maritime strategy.

There are three reasons why Beijing could have suddenly turned more conciliatory in its approach to defending its maritime stakes in the contested waters of the Pacific.

First, there is a process of sweeping defence reforms underway in China that is causing turmoil in the PLA's military power structure. The proposed changes challenge a number of established interests, including some in the higher echelons of the military, causing deep resentment in the PLA's power elite. Most notably, Beijing has announced its decision to restructure the PLA's four general departments, the vast bureaucracy responsible for the day-to-day functioning of the military, blaming it as a primary source of the corrupting patron-client relationships within the military. An anti-corruption drive launched last year targeted officials of the general departments, leading many observers to term the anti-corruption drive as an old-fashioned communist purge – a vindictive campaign to eliminate senior officials perceived to be disloyal to President Xi Jinping.

The politics of the reform process is significant, because there is enough evidence to suggest that Xi is using the reforms to consolidate his power and position in the CCP, to the detriment of the military's organisational effectiveness. Indeed, even as officers in the general departments have been targeted, some other military commanders known for their inept ways remain untouched, possibly because of their loyalty to Xi, who has now assumed direct command of the armed forces.

More importantly, internal differences between the services seem to be undermining the PLA's operational efficiency. While the reforms seek to put the Army, Navy and Air Force on an equal footing, senior naval and Air Force officers are unhappy with the fact that the Army retains overall command of the new military theatres. Given that China's three principal external threats (Taiwan, the South China Sea and East China Sea) have a maritime character, the PLAN was said to have been expecting command of the Southern Theatre Command. The Chinese Air Force, which plays a major role in defence of the western Pacific islands, had also been hopeful of a greater command responsibility. The continuing dominance of the Army over joint formations, analysts say, is likely to effect the PLA's operational posture, especially its ability to undertake integrated operations in a maritime environment.

Beijing realises the limitations imposed by the defence reforms on maritime operations, and deems the coming months particularly unsuited for militaristic missions in the western Pacific.

The second reason for a lull in China's maritime provocations in the South China Sea is the impending decision by the Permanent Court of Arbitration (PCA) on the legitimacy of China's Nine-Dash line. The case, brought before the PCA late last year by the Philippines, is widely expected to reject China's excessive claims in the South China Sea. While Beijing has refused to participate in the case and publicly declared its intention to ignore the ruling, it realises the verdict could impact the political dynamics of the South China Sea. A decision in favour of the Philippines' position would be perceived as a moral victory by the US and its allies. Fearing the worst, China has intensified lobbying of other nations to win support for its own claims in the region. It is Beijing's keenness to avoid 'internationalising' the South China Sea issue that has held Chinese maritime agencies back from an open display of aggression. At a time when Beijing has been urging Asian countries to collaborate in the framing of a security governance model with 'Asian features' to counter the US 'rebalance' to the region, a maritime power-play would seem incongruous.

The third and most important reason for China's strategic drawdown in the South China Sea is ironically an issue of maritime tactics. Apparently, Beijing's slow build-up of maritime features over the past two years has already given it the facilities it needs to monitor and control maritime activities in the South China Sea. During a hearing in the US Congress last week, it was revealed that China's ongoing reclamation at Scarborough could create the 'third vertex of a triangle of Chinese military bases' which could be used to not only threaten the main Philippine island of Luzon (as is being widely speculated) but also to exert wider control over the South China Sea. US Pacific Fleet intelligence indicates that China's seven new islands at the southern end of the Spratly Islands and a new naval facility at Scarborough could provide Beijing the ability to effectively control the freedom of navigation and free access to markets for nations which ply the waters of the South China Sea. Beijing's announcement that its forthcoming drills in the South China Sea will involve forces both in the Spratly as well as the Paracel islands, as well as recent confirmation by a source close to the PLAN who said Beijing would begin reclaiming Scarborough shoal, appears to vindicate US suspicions.

Beijing realises that while it operates from a position of strength in the region, it must not harm its interests by displaying needless aggression. All it must do is ensure a quiet and efficient assertiveness to make sure it protects its strategic interests without indulging in an act that could provide the spark for its own tactical containment.