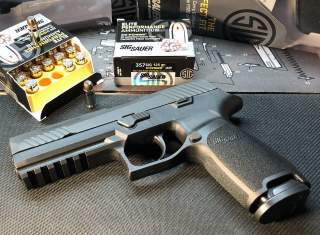 Despite a recent Department of Defense report detailing accidental discharges and frequent malfunctions, the Sig Sauer P320 9mm pistol, adopted as the M17 and M18 under the Army’s Modular Handgun System program, is “safe to operate,” Army and Sig Sauer officials told Task & Purpose on Jan. 31.

An evaluation of DoD gear and tech programs released earlier this month by the Office of the Director of Operational Test and Evaluation (DOT&E) revealed a number of issues during testing of the XM17 and XM18, including the ejection of live ammunition, frequent stoppages or malfunctions, and accidental discharges when dropped.

But what the DOT&E report didn’t reveal, officials say, is that the Sig Sauer and the Army both corrected the issues through a number of upgrades to the original P320.

“There is no drop test deficiency with the MHS,” PEO Soldier spokeswoman Debi Dawson told Task & Purpose. “The drop test referenced in the DOT&E report occurred on an early prototype of the MHS. Sig Sauer corrected this issue prior to the start of testing, and the MHS passed the Army’s drop test.”

News of the accidental discharges in particular has been a thorn in Sig Sauer’s side since it won the Army’s $580 million MHS contract in January 2017. After the accidental discharges first cropped up last August in reports from civilian P320 users, Sig Sauer issued an upgrade for civilian owners and insisted during a demonstration to reporters that the MHS was “unaffected” by the problem.

When the error appeared during the DoD IOT&E trials conducted in August and September, Sig Sauer worked with the Army on a set of modifications before shipping the firearms off to the service for fielding.

“The MHS meets, or exceeds, all safety and operational requirements with XM1153 jacketed hollow point ammunition for which it is optimized,” Dawson told Task & Purpose. “The test results published in the Director of Operational Testing and Evaluation (DOT&E) report are being used to make the MHS even better.”

According to Sig Sauer chief marketing officer Tom Taylor, the Army doesn’t even have to worry about making anymore pesky modifications: The company never sent the Army versions of the unmodified P320, and all of the M17 or M18 pistols that made it into the hands of soldiers featured an upgraded trigger system.

“Any gun sent to an infantry soldier has certainly had a safety upgrade made for the drop test,” Taylor told Task & Purpose, insisting that, the issues detailed in this month’s IOT&E report were addressed long before members of the 101st Airborne got their pistols on Nov. 30. “All of these problems were addressed in 2017,” he said. “This is old news.”

Those upgrades seem to be working — at least, in civilian circles. Of the of the 500,000 P320s shipped to civilians since 2014, about 100,000 had come in for upgrades, with zero subsequent discharge issues, Taylor said. (“As soon as the guns came back, everyone starts dropping the gun on the ground for their blogs,” he laughed, referencing the flurry of amateur testing that gripped gun blogs after news of accidental discharges first emerged in 2017.)

But that’s not stopping Sig Sauer from redoubling its testing efforts to ensure that the ambiguity created by the DoD report never emerges again. “Our gun does pass every standard we know of, but we decided that after this, we need to have a higher standard for our testing,” he told Task & Purpose. “We are more confident that the issue is resolved.”

The Army is hedging its bets. While Taylor insisted that the problems with the XM17 and XM18 were identified, isolated, and addressed long before the Army ever received their shiny new P320, this doesn’t necessarily mean that future issues might crop up. Dawson indicated that the branch is developing a process to address any future issues for those M17s and M182 that fielded to units like the 101st Airborne and 1st Security Force Assistance Brigade.

“The currently fielded pistols meet all safety and operational requirements for the ‘go to war’ configuration,” Dawson told Task & Purpose. “Once proven out through testing, the Army will add the changes to the production of new MHS. The Army will also develop a plan to retrofit any fielded MHS with these changes.”