The Simple Elegance of the Molotov Cocktail 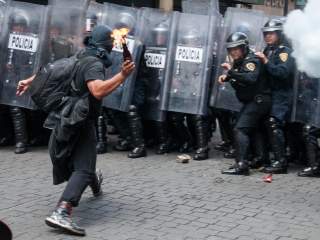 The Molotov cocktail is one of the most visible icons of civil resistance in the modern age. Whether it is on the streets of Kyiv, Athens or the latest site of any G20 meeting, the Molotov cocktail is one of the variables modern media will seize on to determine whether a mass demonstration is a protest or a riot. The image of fires burning and bottles being hurled through the air are eye-catching because they are asymmetric, providing average civilians with potent lethality to challenge even the most heavily-armed riot police. Although the Molotov cocktail is now synonymous with Leftist agitation, this great equalizer actually got its name as a mocking jest to one of the largest names in Communism. The drama all began seventy-six years ago in the forests of Finland.

On November 30, 1939, the Soviet Union sent 600,000 troops across its northern borders into Finland. Following the infamous Nazi-Soviet non-aggression pact of August 23, 1939 (also known as the Molotov-Ribbentrop pact), the Soviets were given free rein to carve a sphere of influence in Eastern and Northern Europe in areas traditionally part of the former Russian Empire. The Soviets successfully put boots on the ground in the Baltic States in September and, once complete, turned their attention northward. Finland was in a better position than the Baltic States to resist Soviet aggression; it had more people, more weapons and the Mannerheim Line of fortifications along its arboreal borders. But even with the knowledge that war might be coming, Finland could only muster a fifth of the manpower and a fraction of the modern weaponry of the USSR and had little advanced weaponry to defeat Soviet tanks. When the Soviets crossed the border in late November, their military planners anticipated a war would last for only a week or two. It lasted until March in no small part because of the Molotov cocktail.

The Molotov cocktail is an elegantly simple weapon, needing only a bottle and some flammable materials like gasoline or tar. Using either a basic fuse or even an old rag, a soldier sets the end on fire and hurls the weapon so the force of impact will shatter the glass and ignite the flammable materials inside. While the weapon was first employed during the Spanish Civil War in 1936, the Winter War was where it first became truly famous. It is also when the weapon got its modern name. The Finns sarcastically named it for the Soviet Foreign Minister, Vyacheslev Molotov, after he claimed Soviet bombers were dropping food aid to starving children in Helsinki. The Molotov cocktail was the perfect accompaniment to “Molotov’s bread baskets.”

How could such a simple weapon be so useful against the Soviet war machine? The answer lies in World War II-era tanks. Much like their World War I counterparts, tanks of that time needed ventilation to allow the crew to breathe. Rather than attacking the tank itself, the cocktail’s incendiary brew attacked the men inside. Flames were difficult to stamp out in the cramped spaces of the tank and there was no way to escape the heat. Russian tanks hit with these weapons were not destroyed but rendered temporarily unusable. Once the tank crews were outside their protective shell, they were just as vulnerable as any other infantry to the ambushes the Finns laid across the rest of the front. In this way, the Finns could effectively neutralize Soviet tanks for pennies on the dollar.

The Molotov cocktail was by no means a perfect weapon. The drawback to this approach is obvious: Molotov cocktails could only be effective if a Finnish soldier could get within throwing distance of a Soviet tank and hit a small target area to ensure the explosion affected the crew. There was only one way to employ the weapon: soldiers had to be especially clever and brave to get close enough to a tank, throw the weapon, and then get away before getting shot either by the tank or its escorts.

Finland ultimately sued for peace in early March of 1940 after the Soviets broke through the Mannerheim Line and penetrated deep into the country. The Soviet “victory” was Pyrrhic at best: they had to fire their wartime generals, obtained minimal territorial concessions, and took 300,000 casualties. The myth of Soviet military sophistication was shattered, and the Nazis accelerated their own secret invasion plans of the Soviet Union. These titanic events were only possible because a ragtag group of Finnish soldiers could hold off Soviet armor with Molotov cocktails.

1) Asymmetry is not a new phenomenon: While it is popular now to highlight asymmetric warfare as a defining characteristic of the modern battlefield, the Molotov cocktail case study shows that asymmetry always has been, and likely will always be, a hallmark of warfighting. Be prepared for battlefield innovations that will damage your expensive, specialized equipment for pennies on the dollar.

2) Be creative when framing requirements: The Molotov cocktail was a brilliant innovation for Finland because it addressed one of their crucial requirements: neutralizing Soviet tanks. The ingenuity comes from the fact that they framed their military problem as how to stop a tank versus how to destroy a tank. This distinction is minor but important. Focusing on stopping a tank is much broader and thus can elicit different kinds of solutions than focusing on how to penetrate a tank’s armor.

3) Beware of functional fixedness: Functional fixedness is a psychological phenomenon that explains why humans are predisposed to assuming an object only has a single use. For example, it is easy to see a hammer as tool just to hit nails and not as an impromptu paperweight or doorstop. In the case of the Molotov cocktail, this ability to overcome functional fixedness allowed the Finns to see the value of both the weapon itself and to recognize a meaningful way national distilleries could play in the war effort.

Matthew Merighi is a Master of Arts candidate at the Fletcher School of Law and Diplomacy at Tufts University. He is also the Director of Publications at the Center for International Maritime Security, the host of the Sea Control: North America podcast, and the author of the Lessons from History series. Matthew tweets at @mattmerighi. This article first appeared in the Bridge.