The Simple Way China and America Can Avoid a Naval War 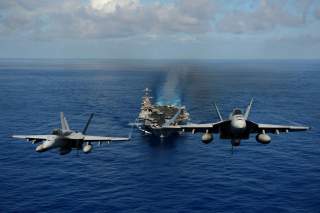 Even as China’s People’s Liberation Army Navy grows in strength and capability, there are opportunities for some level of cooperation between it and the United States Navy. While disagreements are a fact of life, the two navies are not destined to have a mutually antagonistic relationship.

“Particularly with our relationship with China, my relationship with my counterpart in China, very clear to say, ‘hey, we’ve got a lot of common interests even between our two navies.’” Adm. John Richardson, chief of naval operations told an audience at the Center for Strategic and International Studies in Washington on May 25.

“There are some areas where we disagree. I think that’s a natural thing when we have two nations of, you know, this power and complexity. And so as we negotiate through those areas where we disagree, let’s do everything we can to mitigate and minimize risk so that we don’t have some kind of a tactical miscalculation that gives rise to some escalation that – we don’t want to spend the energy to have to go through that.”

There are some very practical and sensible areas where the U.S. Navy and the PLAN can cooperate. In many cases, it is a necessity that the two great powers cooperate in order to prevent a situation from spiraling out of control.

“Some of these are very practical operational concepts – you know, the Convention of Unplanned Encounters at Sea, you know, allows all of those navies in that region of the world to have a sense of – a level of predictability when they encounter each other on the high seas,” Richardson said. “We come up on the radio, we exchange communications, and things proceed without – you know, they’re very predictable, right? And so I think that these types of mechanisms are extremely important to just keep everything from a – keep it predictable, right, and prevent a miscalculation from escalating while we work through our differences.”

Particularly important to prevent an unintended conflict from breaking out is communications. China and the United States must keep the lines of communication open to prevent misunderstandings.

“I would say is that leader-to-leader communication is very important,” Richardson said. “I mentioned, you know, the dialogue with the other chiefs of Navy, if you just want to talk about the maritime dimension of this, because the more those conversations happen, the more we exchange information, the more we – it sounds, you know, a bit fluffy, I guess, but the more you build trust and confidence – and sometimes that’s at a very personal level – I think that that goes a long way towards managing crises or managing miscalculations or events when they happen.”

Moreover, once agreements are set, maritime powers have to abide by those agreed upon norms in order to ensure that those behaviors become routine.

“You’ve got to abide by them behaviorally so that they become the precedent,” Richardson said. “And then you’ve got to reinforce them with sort of a steady state level of communication so that, you know, people understand what you’re after. So that, I think, goes a long way towards preventing misinterpretation.”

The bottom line is that open lines of communication could be the key to preventing conflict in the Western Pacific. “In the absence of information or the absence of communication, too often people just interpret the things for the worst, and that would lead to responses that nobody would want,” Richardson said. “So we spend a lot of time together, and we sponsor an international sea power symposium every other year.”