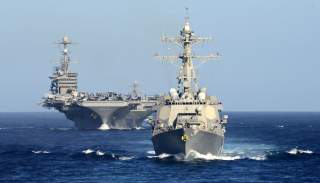 Since Donald Trump’s inauguration, many analysts have anticipated that the United States would return to a unilateralist approach to international security. Initial statements from the new administration hinted at a change in Washington’s Asia policy away from the multilateral diplomacy and engagement championed by Obama’s ‘rebalance’ to Asia. In particular, Trump’s emphasis on ‘America First’ worried many. It did not sound inclusive, and was not reassuring to allies dealing with the security implications of China’s rise. Will unilateralism serve US interests in the South China Sea?

The South China Sea issue is both an opportunity and a challenge to Trump’s promise to make America great again. The US could use the South China Sea case to demonstrate its commitment to a stable, rules-based international maritime order. This means honoring the Permanent Court of Arbitration’s 2016 ruling and not recognizing Chinese-imposed restrictions on navigation in the sea.

Alternatively, Washington could fold to Chinese pressure, exempt Beijing from established international maritime rules and norms and consequently cede leadership to China in maritime Southeast Asia. This would mean that what applies to the Mediterranean Sea, the Gulf of Mexico, the Sea of Japan and all other maritime zones of the world would not apply to the South China Sea, which would effectively become a Chinese lake.

The choice could not be clearer.

International law is only as good as its enforcement. The United Nations Convention on the Law of the Sea (UNCLOS) is perhaps the fairest international law of all. It provides the same entitlements to all coastal states, regardless of economic size, military prowess or international political influence. The July 2016 ruling, which the US has insisted is binding, needs enforcement for the South China Sea to remain a rules-based international waterway.

As Trump formulates his administration’s Asia policy, the South China Sea will remain high on the agenda. During his first overseas trip as Secretary of Defense, James Mattis said that ‘freedom of navigation is absolute, and whether it be commercial shipping or our US Navy, we will practice in international waters and transit international waters as appropriate’. Many perceived the statement as measured and well-calibrated. But his words had echoes of the US unilateralist approach.

This was the case when Secretary of State Rex Tillerson floated the idea of physically blocking China’s access to its artificial islands in the South China Sea during his confirmation hearing. There was no mention of working with partners, allies and the international community at large in upholding the rule of law.

While unilateral US Navy freedom of navigation operations (FONOPs) should continue, including in waters surrounding Chinese-built artificial islands, Washington should establish another mechanism that engages its treaty allies and partners in the Pacific on freedom of navigation issues: bilateral and multilateral freedom of navigation patrols. In essence, Washington should institute another instrument that involves allies and regional partners that not only challenges excessive maritime entitlement claims, but also reinforces the rule of law in other areas that could be subject to new and illegal restrictions by any state in the future.

Australia and the Philippines are ideal partners for bilateral or trilateral FON patrols. Canberra has been conducting overflight exercises in the South China Sea since the 1970s and its involvement should not be too surprising to the Chinese. Manila is a direct claimant and a US treaty ally. In early 2016, a joint patrol was integrated as one manifestation of the long overdue US–Philippines Enhanced Defense Cooperation Agreement forged in 2014. But the Duterte government decided to end this cooperation.

A clearer US commitment to defend Philippine vessels in the South China Sea, as per Article 5 of the 1951 US–Philippines Mutual Defense Treaty, could encourage an increasingly unpredictable Manila to begin to trust Washington again. The transition from the Obama to the Trump administration provides an opportunity to reset relations between the two allies.

Moreover, a multilateral mechanism could coordinate multi-party FON patrols, not just in the South China Sea, but in all of East Asia’s maritime commons. The mechanism should be open to China to avoid any misconception of ‘containment’ or of the US and its allies ‘ganging up’ on Beijing. The US could propose this to the ASEAN Regional Forum or any ASEAN dialogue as a confidence-building measure in the maritime Asia Pacific, with the goal of maintaining open, secure and unimpeded access to East Asia’s maritime commons without prejudice to any sovereignty claims.

The first such exercise could begin in the Sea of Japan, then move south to the East China Sea, passing through the Luzon Strait towards the South China Sea, exiting through the Malacca Strait and then to the Indian Ocean or vice versa. The guiding mechanism should be relevant provisions of UNCLOS — nothing else.

China could complain, but if many countries are involved the pressure for compliance will be greater. If FON exercises, including FONOPs, are conducted only unilaterally by the US Navy, the South China Sea issue could easily spiral into a great-power struggle and the importance and essence of the rule of law will be sidestepped.

Since respect for international law in East Asia’s maritime commons is a vital US national interest, Washington should take the lead and engage East Asia. Unilateralism can only do so much.

Jeffrey Ordaniel is a resident Vasey fellow at the Pacific Forum Centre for Strategic and International Studies, Honolulu and PhD candidate at the Graduate Institute for Policy Studies, Tokyo.

This first appeared in EastAsiaForum here.