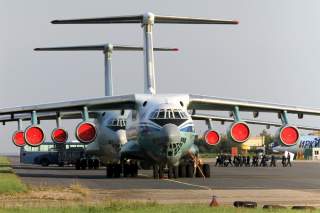 All the signs indicate that China is preparing to reject the anticipated adverse judgment of the Permanent Court of Arbitration (PCA) on the South China Sea.

The Philippines is arguing that China is acting illegally in exploiting resources in the areas beyond the United Nations Convention on the Law of the Sea (UNCLOS) limits while forcibly preventing other nearby states like the Philippines from exploiting the resources in the same areas. If the PCA calls for China to abandon its nine-dash line claims and China rejects this finding, what options would then be available to the international community?

The PCA is a less powerful court than the International Court of Justice (ICJ). Unlike the ICJ, it does not have the equivalent of article 94 in the UN Charter which ominously states that:

If any party to a case fails to perform the obligations incumbent upon it under a judgment rendered by the Court, the other party may have recourse to the Security Council, which may, if it deems necessary, make recommendations or decide upon measures to be taken to give effect to the judgment.

Still, ignoring a finding of the PCA would still be significant, as it would amount to ignoring international law. As such, members of the UN Security Council could seek a UN Security Council discussion and resolution on the matter. They could interpret a rejection of the PCA finding as highly damaging to the credibility of UNCLOS, and the decades of diplomatic work that its successful negotiation entailed. They could classify the South China Sea issue as a dispute causing international friction, and hence within the UN Security Council’s mandate. While it is inevitable that China, and perhaps also Russia, would seek to prevent the UNSC from discussing the issue, what would be the likely position of the other Security Council members?

At least two of the Permanent Council members, the US and the UK, are taking a strong line. Despite the US not ratifying UNCLOS, President Barack Obama has strongly emphasised respecting the PCA’s findings. UK Prime Minister David Cameron has recently stated that he expects China to abide by the outcomes of the Court. France is more difficult to predict. It and other EU members have been calling for resolution of the South China Sea disputes through international law. At the same time, however, they have been unwilling to directly confront or denounce China’s more assertive actions, such as its declaration of an Air Defense Identification Zone (ADIZ) in the East China Sea in 2013.

Some of the non-permanent members may be willing to support a UN security council discussion of the case. Japan is speaking the language of the ‘rules-based global order’ in relation to the South China Sea. Malaysia is a claimant state in the region and appears to be increasingly concerned about the situation. However, it has also sought to maintain a ‘special bilateral relationship’ with China and to date has been unwilling to publicly confront China’s actions. It may not be willing to take a strong stand.

Australia has a strong interest in the resolution of disputes in the Asia Pacific through peaceful means and international law. Australia sees China’s nine-dash line as an unacceptable claim and its actions as inconsistent with the rules-based global order. While China is not an obstacle to world order overall, a degree of pushback is reasonable. Any PCA ruling casting doubt on China’s nine-dash line claim represents an important opportunity for Australia to develop, strengthen and diversify its approach. Part of this can be to increase diplomatic pressure in line with Rory Medcalf and Ashley Townsend’s recent call for a broader-based campaign that increases the reputational costs of China’s unilateralist posture.

There are two advantages of broadening and extending diplomatic pressure, especially by comparison with Freedom of Navigation operations (FONOPs). This approach does not  risk sending ADF assets into disputed zones of the South China Sea. While China’s adoption of better collision avoidance protocols has reduced the risk, a recent unsafe intercept of a US spy plane shows that there is still potential for a repeat of the 2001 EP-3 incident. This approach also avoids the perception that Australia is militarizing the issue.

Australia can expect blowback from China if it seeks to increase diplomatic pressure. A taste of this as already evident in the form of some Chinese community groups warning the government against a strong stand on the South China Sea last month. Or we can think back to the reaction to the visit of Rebiya Kadeer in 2009, when the Chinese Embassy here sought to prevent the Uighur leader speaking.

China could threaten economic retaliation. China is alleged to have used economic levers such as its trade in rare earth metals against Japan after East China Sea tensions arose in 2010 (although this is still unproven). But China may be just as (if not more) wary of disrupting trade with Australia. As Alan Oxley recently noted, what matters more to China in the long run: national growth — and hence social harmony — or its ambitions in the South China Sea?

One point in Australia’s favor is that it has stood up to a major power before in support of the rules-based global order. In 1986 the ICJ found that the US’s Nicaragua policy violated international law and ordered the US to cease its support for the Contra paramilitary and military activities. The UNSC drafted a resolution calling for US compliance. Australia, then a non-permanent member of the UNSC, courageously supported the resolution. While the US ultimately exercised its veto, the process threw a spotlight on questionable policies in South America.

While Australia did not speak to the resolution, it likely sympathized with some of the arguments put forward. Ghana stated that ‘any development which undermines the existence and efficient functioning of the UN also undermines our own sovereignty’. Denmark stated that it ‘remained convinced of the important role of the ICJ in the peaceful settlement of disputes and of the necessity for member states to accept the Court’s verdicts’. Iran pointed out that in the ‘absence of a law enforcement agency for international law… respect for the UN Charter depended on the degree of accommodation that member states would show in rejecting parochial short-sightedness in favour of a functional and universally respected international system.’

These points would seem to be as valid today as they were 30 years ago. If these developments come to pass, Australia should publicly and privately encourage a spotlight on China flouting the international justice system, just as it did in 1986 when the US did the same.