The State Department Press Corps Is an Asset, Not a Liability 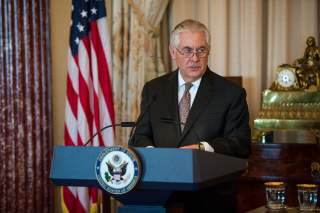 A bad idea, left unchallenged, can become a “good” idea in the minds of the powerful. It can then be acted upon, often to terrible results. The Bay of Pigs fiasco, for instance, was the result of groupthink, where critical questions are “assumed away” in service of group cohesion. As Arthur Schlesinger—who was part of the group that made the decision to launch the ill-fated invasion—put it, “Our meetings were taking place in a curious atmosphere of assumed consensus, [and] not one spoke against it.”

Secretary of State Rex Tillerson should heed the lesson of one of America’s worst foreign policy disasters. Tillerson’s State Department is icing out the press, and that will hurt him terribly. The press and its persistent questions, after all, are one of the best checks on groupthink and, therefore, any number of bad decisions. Journalists may be a pain, but policymakers should be grateful for them in the end.

Tillerson’s State Department has been hostile to the press since he came to office. This dynamic became obvious when he brought just one journalist with him on his recent trip to Asia, Erin McPike of Independent Journal Review. IJR is conservative and unlikely to provide dogged, skeptical coverage. It’s described by an adviser to the outlet as “if you crossed RedState with Buzzfeed.”

This is only one such incident. The State Department did not hold a press briefing for the first six weeks of the Trump administration, then abruptly cancelled a much-anticipated press conference following the release of the administration’s revised travel ban. When Tillerson appeared at a joint press conference on the subject with Attorney General Jeff Sessions and Secretary of Homeland Security John Kelly, he did not answer any reporters’ questions.

Yet when the State Department press corps finally got its first press conference—forty-seven days after the administration began—Tillerson did not show, let alone answer questions.

And now, on top of it all, the State Department is set to halt on-the-record press briefings for the foreseeable future.

Tillerson would hardly be the first person to try to freeze out the press, but this approach will only hurt the administration, and the country, in the end. Take the administration’s early missteps, the ones that, regardless of the wisdom of the underlying policy, were enacted in a haphazard and poorly planned way. How many of those mistakes would have been fixed by proper vetting by the press corps?

The original travel ban, for instance, would have been sent back to the drawing board with the first question almost any reporter would ask—even in an off-the-record setting—namely “How is this going to work?” In answering that question, the administration would have been forced to create a more thorough plan.

Or take Tillerson’s recent mixed messages on North Korea. He said he hoped to “de-escalate” the situation while also saying all options, including military ones, were on the table and that “strategic patience” had ended. Needless to say, our allies were confused by seemingly contradictory messages. Such a contradiction could have easily been handled before the fact by a reporter simply asking “Which one is it?”

The Kennedy administration—and how it learned from the Bay of Pigs—should be the example for the Trump administration moving forward. The Kennedy administration learned that it would have been far better off if someone had asked “Are we sure the Cuban people will support invaders trying to unseat a leader the people just installed in a popular revolution? Does that make sense?” Even if that person had been a reporter, publicly questioning the wisdom of a potential invasion and embarrassing the administration, it still would have been infinitely preferable for the Kennedy White House than going through with its ill-fated plan.

Administrations often find journalists problematic. If recent experience is any guide, that will be true for the incoming Trump’s White House, as well. Yet, for its own sake and for the sake of the country, it must resist the temptation to disregard any outlet that will not provide it with 100 percent positive coverage. Otherwise, we should prepare for another groupthink-induced disaster.

Neal Urwitz is director of external relations at the Center for a New American Security. The views expressed are his own.

Image: Secretary of State Rex Tillerson speaks during a meeting for the Global Coalition on the Defeat of ISIS. Flickr/Secretary of Defense