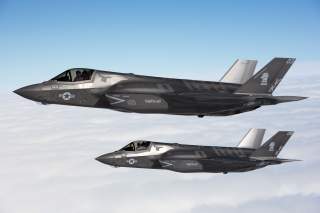 The Yak-141 manufacturer, Yakovlev, suddenly was faced with the reality of capitalism: Namely, you need money to do cool things. And nearly 30 years after the first flight of the Yak-141, the U.S. Marine Corps is taking off vertically from carriers with it’s F-35Bs. Here’s how the experimental Soviet fighter gave birth to the most controversial aircraft of the modern era.

The Yak-141 was the supposed to be a major technological leap in Soviet Union’s VTOL program, which kicked into high gear in the 1970s after the Soviet Union took note of the iconic Harrier’s development in the UK. But the program initially had trouble getting off the ground due to the dismal performance of the Yak-141’s predecessor the Yak-38 ‘Forger,” which Soviet military officials deemed, well, a pile of flying crap following its unveiling in 1971.

Despite its functional VTOL system, it lacked the extended combat range of the Harrier as well as reliable radar system and appropriately lethal armament — not to mention the Yak-38’s terrifying automatic ejection seat that both saved lives and surprised the pilot when it shot them out of the plane without warning. Although the National Interest argues that the Yak-38 was a concept aircraft that pushed into service to help fill holes in Soviet Naval Aviation and never meant for frontline combat, it was the operational VTOL aircraft in the Soviet arsenal for a decade.

Military hardware that had once been highly classified and the basis for our own defense planning was now openly marketed at airshows around the world…This environment permitted a visit to the Yakovlev Design Bureau, (YAK) for a vertical/short takeoff and landing (VSTOL) technology assessment. Yakovlev is the FSU’s sole Design Bureau with experience in VSTOL aircraft and has developed two flying examples, the YAK-38 ‘FORGER’ and YAK-141 ‘FREESTYLE’”

After the Yakovlev-Lockheed partnership was publically revealed in 1995 and formally ended in 1997, but the Yak-141’s unique designs persisted. When Lockheed entered a VTOL variant of its X-35 demonstrator into the Pentagon’s Joint Strike Fighter (JSF) in 1994, the submitted engine design proposal was radically different from initial proposal developed prior to the Yakovlev deal. Indeed, the VTOL design was changed to ‘ASTOVL Configuration 141’; while it is possible that this name was a coincidence, it’s worth noting for the possible reference to the Yak-141.

To be clear, the F-35’s overall design is not modeled after the Yak-141: The former used a different method for stabilization (see the two jets firing on the front of the plane in this GIF) and had a different aerodynamic profile. But it’s almost certain that the data gleaned from the old Soviet VTOL project were most likely utilized in the development of the VTOL variant of the F-35 Joint Strike Fighter. And that means the F-35 owes at least part of its existence to a Soviet-era weapons program that never truly took flight.

Brad Howard enjoys long walks on the beach, and reading non-fiction on the subway. He holds an M.A. in Film from American University, and a B.A. in Political Science from the University of North Carolina Wilmington. He was also in the U.S. Air Force for four years, and complained about it constantly during those four years.