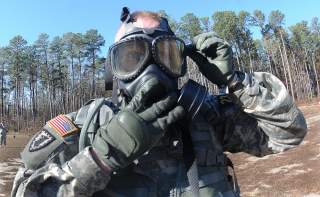 Image: Sgt. Bryan Teneyck, representing the Installation Mangement Command, adjusts his mask during one of the Chemical, Biological, Radiological, Nuclear and Explosives tasks on the first day of the 2013 Best Warrior Competition.​ Flickr / U.S. Army