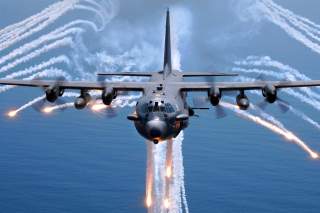 The giant bomb U.S. forces dropped Thursday on an ISIS training camp in Afghanistan did not cost $314 million to develop, or $16 million per unit as reported by multiple news outlets. (RELATED: US Drops ‘Mother Of All Bombs’ On ISIS In Afghanistan)

Every news report about cost of the “Mother of All Bombs” relied on a misreading of a 2011 article or a dubious internet website that InfoWars once quoted with “healthy bit of skepticism.”

In fact, the Air Force doesn’t even keep track of the per unit cost, nor the cost of the program as a whole, because it is not manufactured privately.

“We don’t have a cost per unit” for the MOAB, Air Force spokesperson Ann Stefanek told The Daily Caller News Foundation. “These munitions were produced in-house so we don’t have a standard procurement cost associated with them.”

The Air Force mostly used existing technologies and hardware for the first MOAB prototypes and never contracted out the full production of the bomb, so they did not need to itemize and add the cost of each weapon component, Stefanek told TheDCNF.

Many reports Thursday, including USA Today, the Washington Examiner, CNBC and others, claimed the MOAB cost $314 million to develop, citing a 2011 Los Angeles Times report.

The cost estimates in that article, however, only refer to the cost of the Air Force’s biggest bunker busting bomb, the 5,300 pound Massive Ordnance Penetrator (MOP), or GBU-57, which is built by private defense contractor Boeing Company. “At a total cost of about $314 million, the military has developed and ordered 20 of the GPS-guided bombs, called Massive Ordnance Penetrators,” the LA Times report says.

While the two bomb types are related, they serve different functions — the MOP is designed to destroy underground bunkers as deep as 200 feet below the surface, while the MOAP wipes out everything on the surface within a mile radius. The MOAB, like its Daisy Cutter predecessor, can only be dropped out of a C-130 built by Lockheed Martin, and the MOP is deployed from the B-2, a Boeing aircraft.

Many news organizations, including TIME and CNBC, also cited Deagel.com, a site with extensive lists of weapons assets owned by multiple countries, which claims the MOAB costs $16 million per unit, the same amount as the reported cost of the MOP.

Deagel links to no source to verify its information. The site’s IP is registered to an address in Spain, and the most press they’ve received was for a 2015 prediction that the U.S. population would drop by more than 80 percent by 2025 due to an economic and cultural collapse. “The American collapse is set to be far worse than the Soviet Union’s one [sic],” the forecast said.

InfoWars wrote this disclaimer when it wrote up Deagel’s report: “…we publish this report with some hesitation and a healthy bit of skepticism, yet find it compelling enough given the current global environment that it may be of interest to readers.”

The Air Force did award at least one contract in the development of the bomb to Dynetics, a defense contractor headquartered in Huntsville, Ala., for design of the bomb’s guidance system for the relatively low sum of $35,000.

The MOAB was developed rapidly leading up to the Iraq war in 2002. The bomb is based on the BLU-82/B “Daisy Cutter” used to clear helicopter landing sites in jungles during the Vietnam war.

The Air Force Research Laboratory ordered designs concepts for “a 21,000-pound weapon system called the Massive Ordnance Air Blast” in April 2002, according to a 2014 report Dynetics delivered to the Senate Committee on Appropriations.

Dynetics then partnered with the Air Force to build and test three prototypes of the MOAB on March 11, 2003. Anyone within 20 miles of Eglin Air Force Base in Florida that day would have been able to see a giant mushroom cloud on the horizon at 1 p.m.

The Air Force then “produced more than 10 weapons and delivered them between April and May,” according to the Senate report. just nine weeks after the successful test. The rapid development of the weapon could have cost more than $314 million.

“Every technical glitch or roadblock we encountered was worked out,” Robert Hammack, who lead the design team for AFRL, said in an Air Force post about the history of the MOAB. “Our team was filled with engineers and other people with deeply important skill sets necessary to pull this off.”

The MOAB is reportedly constructed at McAlester Army Ammunition Plant, in Oklahoma, though a spokesman for McAlester could not confirm that to TheDCNF.

The fact that the bomb was never used during the Iraq war doesn’t mean they didn’t have an effect, according to the Air Force. “The most amazing thing about MOAB is it’s the most powerful bomb ever built and has done its job — deterring the enemy — simply because they know about it,” Hammack said.