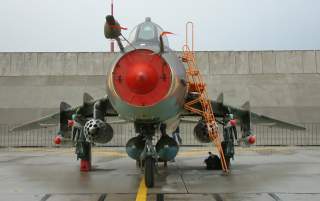 The Sukhoi Design Bureau forged a reputation for big and powerful fighter-bombers. Today, the Russian company primarily builds different variants of the Su-27. Almost unnoticed, a dwindling number of much older Sukhoi Su-22s remain in service.

In Syria, together with much more powerful Su-24s, they form the backbone of an embattled air force.

Often overlooked, the Sukhoi Su-20/22 family was not only widely exported by the former Soviet Union, but saw considerable action in around two dozen different conflicts.

The story of the Fitter — that’s the Su-20/22’s NATO code name — includes more than a few controversies. Russian sources contradict each other even when it comes to the number of Su-20/22s the USSR manufactured and exported.

The situation isn’t much clearer when we consider reports of how many aircraft each foreign customer acquired. For example, while most published Russian sources cite a production run of only 771 Su-20s and Su-22s for export, official Sukhoi Design Bureau records state that the Komsomolsk-on-Amur works manufactured 1,165 Su-20 and Su-22 for export to 15 countries.

A simple comparison of how many Su-20 and Su-22s have been operated by various air forces over the years indicates that the former figure is a significant understatement, while the latter is probably short by several dozen.

The Middle East was one of biggest export markets for all Fitter variants. Iraq used to be the largest foreign user of the Su-20/22 family, but Egypt, Syria and Yemen also acquired and operated significant numbers of this type.

Syria originally received 15 Su-20s in September 1973. These entered service with No. 685 Squadron based at Tiyas air base, and flew 98 sorties during the October 1973 war with Israel. Eight were lost in combat.

(Note: This first appeared in January)

For most of the 1970s, Moscow strongly resisted further Syrian demands for additional Sukhois. It was only after the Syrian Arab Air Force lost four MiG-21s in an air combat with newly-delivered McDonnell Douglas — now Boeing — F-15 Eagle interceptors of the Israeli Defense Force in September 1979 that Moscow agreed to sell 40 new Su-22Ms to Damascus.

Their crews barely had enough time to convert to their new mounts. The Sukhois flew around 40 sorties during the 1982 Lebanon War. Israel claimed it shot down no fewer than eight Fitters, but Syrian sources confirmed the loss of only one example.

Additional batches including Su-22M-3s were delivered in 1983, followed by no fewer than 42 Su-22M-4Ks that arrived between 1984 and 1985. During the same period, Syrian industry upgraded all of the surviving Su-22Ms to the Su-22M-2K standard.

By 1988, four Syrian squadrons operated different Su-20/22 variants, most of which the Syrian air force had outfitted with locally-manufactured chaff- and flare-dispensers.

Damascus withdrew the remaining Su-20s from service in the late 1990s, when the Syrian armed forces suffered badly due to the regime’s neglect. Therefore, a total of only seven Su-22M-2s, 12 Su-22M-3s, 24 Su-22M-4Ks, five Su-22UM-2Ks and four or five Su-22UM-4Ks survived intact by 2010, when the government finally released enough funding to start a gradual overhaul of the entire fleet.

These variants saw intensive action in the Syrian civil war beginning in late 2012 and especially in 2013. The old warhorses proved quite effective — especially after Syrians accepted Iran’s suggestion of arming the Fitters with B-8M pods for unguided 80-millimeter rockets.

Four more Fitters were lost. Although the regime overhauled a few additional aircraft in 2014, only about a dozen were left fully operational by mid-2015. After three years of intensive operations, the units operating them not only run themselves out of bombs, but even lacked spare drop tanks.

It was therefore unsurprising that Iran — which has been keeping the regime in Damascus afloat financially and through deliveries of fuel since late 2011, not to mention Iran’s direct military intervention since 2013 — agreed to sponsor acquisition of spare parts and armament from Belarus in early 2015.

Combined with the regime’s restored access to The Works — the SyAAF’s primary maintenance facility at Nayrab air base on the military side of Aleppo International Airport — this enabled overhauls of additional aircraft, and an outright revitalization of the entire fleet.

By mid-2016, the Syrians again possessed around 30 Su-22s of different variants in three squadrons at Tiyas, Shayrat and Dmeyr. Perhaps more importantly, thanks to Tehran’s help, the old Fitters are well-stocked with such weapons as parachute-retarded FAB-500ShN and ODAB-500ShL thermobaric bombs, OFZAB-500 incendiary bombs and S-24 unguided 240-millimeter rockets.

Although the number of remaining examples fluctuates, the Su-22s together with Syria’s Su-24s bear the brunt of regime’s air campaign on insurgent-held areas in Idlib and Aleppo governorates. On average, the SyAAF’s Su-22s fly around 25 sorties each day over northwestern Syria. On Nov. 27 and Nov. 28, 2016, the Fitters flew 34 missions per day.

All of the missions involved single aircraft striking pre-planned targets.

Regardless of the “ceasefire” that Russia and Turkey brokered in early 2017, the Fitters are sure to return to action soon. The regime always takes advantage of breaks in combat to conduct urgent maintenance — and get warplanes ready to fight again.

This first appeared in January in WarIsBoring here.