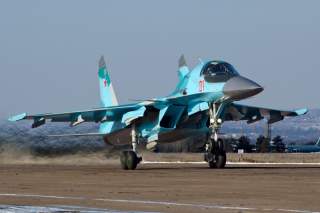 Russia has deployed at least four advanced Sukhoi Su-34 Fullback strike aircraft to Syria as it works to shore up the besieged regime of Bashar Al-Assad and to combat ISIS terrorist. Pentagon officials have confirmed the deployment according to reports.  The Fullback, which is a dedicated strike derivative of the Su-27 series, is the most advanced ground attack aircraft Russia has committed to its nascent Middle Eastern campaign. It is the jet’s first combat deployment outside Russia.

Originally conceived in during the last decade of Soviet rule, the Su-34 was designed primarily as a replacement for Russia’s increasingly decrepit fleet of Cold War-era Su-24 Fencer strike aircraft. Like the Fencer, the Fullback has side-by-side seating. Unlike the Fencer, the Su-34—taking full advantage of its Flanker lineage—is provisioned with a formidable air-to-air self-defense capability. In addition to short-range R-73 high off-boresight dogfighting missiles, the Su-34 carries the long-range radar-guided R-77 air-to-air missile. That means like its nearest Western equivalent, the Boeing F-15E Strike Eagle, the Fullback able to conduct “self-escorted” strike missions. It also has an unorthodox rearward facing radar to warn the crew about an threat approaching from behind.

While the Su-34 is capable of air-to-air combat in an emergency, the Fullback is a strike aircraft. The aircraft has a roughly 700 mile combat radius on internal fuel but is provisioned for aerial refueling with a probe and drogue system. Because the jet is expected to remain aloft for hours at a time, the Russians have uncharacteristically provided for crew comfort. The cabin has overhead space behind the ejection seats, which allows the pilots to stand up and even move around to an extent.

The Su-34 is also equipped with an electro-optical fire control system and was thought to be equipped with a Geofizika forward-looking infrared targeting pod. However, targeting pods are a weak point for Russia’s defense industry. Indeed, Russia has considered license-producing French Damocles targeting pods because its own systems are not very good—but it is unclear if it ultimately procured them. Most clients like India have bought alternative targeting pods like the Israeli-made LITENING. The lack of a decent targeting pod could pose a serious problem for Russia in the fight against ISIS.

The Fullback, which is powered by a pair of 27,500lbs Saturn AL-31F turbofans and can carry about 17,600lbs of ordnance on twelve hardpoints. The jet carries a range of stand-off air-to-ground missiles including Kh-59ME, Kh-31A, Kh-31P, Kh-29T, Kh-29L and the S-25LD, which are designed to hit a variety of ground and maritime targets. It also carries a host of rockets, guided and unguided bombs (laser, electro-optical and satellite)—including RBK-500 and SPBE-D cluster bombs, which should be particularly effective against ISIS. However, how many precision-guided weapons Russia has in its stocks is an open question.

For the Russia, the opportunity to deploy the Su-34, Su-30SM and other jets provides the country a chance to test it latest weapons in an operational combat setting—where it can gain real operational lessons learned. Not only will the latest Russian jets see actual combat so that the Russian military can learn which weapons work and what needs fixing, Russian forces will also understand what they need in terms of spare parts and logistics in an expeditionary setting. Peacetime training and deployments can only teach you so much, this gives the Russian military a chance to test itself against a real foe during a real overseas deployment—which helps it catch up with U.S and allied forces that have seen more than a decade of constant combat and address any training gaps.