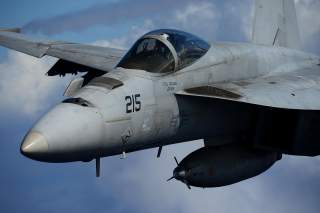 One of the advantages of an advanced fourth-generation design is that unlike stealth aircraft, designers don’t have to worry about stray transmissions compromising the aircraft’s position. The F-35 is equipped with the omnidirectional standard Link-16 data-link for permissive environments and the highly directional low probability of intercept Multifunction Advanced Datalink for high threat environments. The problem is that neither datalink offers enough throughput to transmit as much information as the F-35’s sensors generate—something the Navy is currently grappling with. Meanwhile, the Navy is investing in the very high data rate Tactical Targeting Network Technology (TTNT) datalink for the EA-18G Growler version of the F/A-18, which could easily be adopted by the rest of the Super Hornet fleet—especially as the Naval Integrated Fire Control – Counter Air network comes online.