The Super Sneaky Way the U.S. Army Is Getting An Almost New Tank 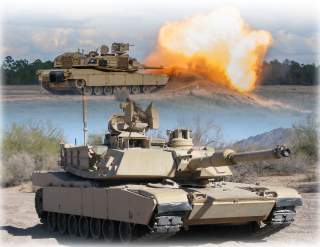 Sources within the Army say the new variant is too heavy for the Army’s fleet of Heavy Equipment Transport vehicles. The Army relies on these vehicles to transport the tanks across long distances to conserve fuel and to reduce wear and tear on the tanks.

What makes this particularly curious is that at the same time the Army is dodging the MDAP process with the tank upgrade program, the Hercules tank-recovery vehicle upgrade program is going through the MDAP process. That means the wrecker will receive greater scrutiny than will the weapon it’s meant to recover.

The F-35 program is being managed through the regular MDAP process, but officials are now working furiously behind the scenes to prevent the next phase of it from following the same path. No one is quite sure what the latest incarnation of the F-35 will be able to do when the program completes the development and testing process, but that isn’t stopping officials from seeking funds for upgrades to the aircraft. They are continuing to develop a list of needed capabilities for the newer version, called Block 4.

The Pentagon estimates the cost just for the initial phase of the modernization program — the research, development, test and evaluation phase — to be more than $3.9 billion through 2022. The Government Accountability Office correctly points out that this “would exceed the statutory and regulatory thresholds for what constitutes a major defense acquisitions program, and would make it more expensive than many of the other MDAPs already in DOD’s portfolio.”

The F-35 Joint Program Office has strenuously resisted efforts to create a separate MDAP for the Block 4 modernization citing time and money concerns. The Joint Program Office wants to run the modernization program as part of the original contract from 2001. By dodging the MDAP process for this effort, the program would avoid many of the processes meant to ensure proper Congressional oversight.

The program would not, for example, have to go through a Milestone B review, which would establish an acquisition program cost baseline and require regular reports to Congress about the program’s cost and performance progress.

This, unfortunately, does not happen very often because the law includes a waiver provision that allows the Secretary of Defense to certify that the program is critical to national security and should be continued. Only one program, the Armed Reconnaissance Helicopter, has been cancelled as a direct result of a Nunn-McCurdy breach.

The biggest ticket item currently attempting to dodge public scrutiny is the Air Force’s newest bomber, the B-21 Raider. This program is being managed by the Air Force’s Rapid Capabilities Office, a secretive group that is conveniently not subject to many of the regulations Congress imposes upon most acquisition programs.

According the Air Force’s Rapid Capabilities Office website, this outfit has a key advantage the regular acquisition office does not:

“waivers to and deviations from any encumbering practices, procedures, policies, directives or regulations may be granted in order to ensure the timely accomplishment of the mission within applicable statutory guidance.”

The Air Force has been extremely cagey about releasing cost information about the new bomber. During the bid process, service leaders announced a $550-million-per-aircraft target cost. So far, Air Force leaders have refused to publicly release the value of the B-21’s development contract with Northrop Grumman.

The stated reason for the secrecy about cost is that a potential adversary could derive information about the size, weight and range. Apparently no one will be able to determine any of that information from the artist’s rendering of the new bomber, or from the list of subcontractors Air Force officials publicly announced.

The MDAP process is complex and does often fail to produce weapons that do what they are expected to do or come anywhere close to meeting the original cost expectations. The process is long over-due for a comprehensive streamlining effort. But even though the process is deeply flawed, the protections it includes were put there to protect the interests of the troops and the taxpayers. Just because the services find the process inconvenient, doesn’t justify their efforts to dodge the oversight mechanisms provided by federal law.

Unless Congress arrests this disturbing trend, the services are likely to continue to use these schemes to bypass the rules and regulations put in place to protect both the troops and the taxpayers. The people’s interests are served only when everyone involved in the process of buying new weapons have the correct information at the beginning.

“Up-front realistic cost estimates and technical risk assessments, developed by independent organizations outside the chain of command for major programs, should inform Defense Acquisition Executives,” wrote Tom Christie, former Director, Operational Test and Evaluation. “The requirement for those assessments to be independent, not performed by organizations already controlled by the existing self-interests sections of the bureaucracy is essential.”

It is understandable that the services want to speed up the process of fielding new weapon systems. While there are many flaws in the current acquisition system, it is not the root of the problem. Service leaders and their partners in the defense industry keep pursuing unrealistic programs and Congress keeps voting for them.

Dodging the current acquisition regulations will not fix that problem, but it will make it easier for all involved to hide the bad results from the people paying for them, but presumably not from those who would suffer the consequences if a weapon were to fail in combat.