The Tomahawk Cruise Missile: How Trump Could Strike Syria 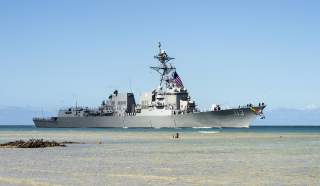 The Tomahawk cruise missile is one of the most successful weapons of the postwar era. A subsonic, bullet-shaped missile with stubby fins, the low-flying wonder quickly became the poster child for American technological supremacy in the 1991 Gulf War. The Tomahawk has been adapted to a variety of missions, from tactical nuclear missile to ship-killer, and with upgrades will serve the U.S. military for the foreseeable future.

The basic Tomahawk design was a nineteen to twenty-one foot long cruise missile with blunt nose, short winglets, and a Teledyne or William turbojet engine. The choice of a turbojet engine rather than an afterburning turbofan engine made for a slower, subsonic missile—but one that could use fuel more efficiently and had a much longer range. The original Tomahawk nuclear cruise missile was to be armed with a nuclear warhead, but subsequent versions were equipped with unitary high explosive, W-80 thermonuclear or W-84 nuclear warheads.

Unlike ballistic missiles, Tomahawk was designed to fly low under enemy air defense radars. Early Tomahawk models used TERCOM (Terrain Contour Matching) to steer themselves to the target. TERCOM, patented in 1958, creates a virtual map of a path to the target by taking a real map and dividing it up into grid squares, with each square assigned a numeric value based on its height over sea level. The missile’s altimeter provides a stream of data that allows the missile to compare its location to virtual map, providing course corrections as necessary. TERCOM’s grid system could store several maps of various resolutions, from larger ones with grid squares kilometers wide meant to get a missile across a foreign border to smaller resolution ones meant to steer the missile to within a 100 meter grid square.

For greater accuracy, Tomahawk also used the Digital Scene Matching Area Correlator (DSMAC) system, which used an imaging infrared seeker to compare nearby terrain to actual aerial or satellite imagery. In 1991 during Operation Desert Storm, reporters in Baghdad claimed to have seen Tomahawks precisely follow roads and streets to their targets. There was probably some truth to this, as DSMAC probably used easily identifiable roads for the cruise missiles to follow.

The most lethal Tomahawk variant that entered production was the BGM-109G Gryphon nuclear land attack missile. Gryphon was launched from a four missile trailer, had a range of 1,550 miles and used the W-84 nuclear warhead. The W-84 warhead was primarily a tactical nuclear weapon with a variable yield from 200 tons to 150 kilotons. Gryphon was originally fielded to counter the deployment of Soviet SS-20 missiles but the 1987 Intermediate Nuclear Forces treaty banned both and the Gryphon was subsequently removed from service.

The U.S. Navy received the three remaining Tomahawk models. BGM-109A was a sea-launched nuclear-tipped cruise missile, with a range comparable to Gryphon. The naval nuclear missile had a W-80 nuclear warhead with a variable yield between five and 150 kilotons. BGM-10A was meant for the land attack mission, and launched from the sea presented a low-flying nuclear threat to the the Soviet Union from all points of the compass. A second model, BGM-109B/E was a tactical anti-ship missile with a 1,000-pound blast fragmentation warhead and active radar seeker. Both Tomahawk models were eventually withdrawn from service.

The third model, BGM-109C, was a conventional land attack version and used against Iraq in Desert Storm. Approximately 280 Tomahawks were launched from ships against targets in Iraq, many on the first night of the war to neutralize high value targets such as the Iraqi Air Force and air defenses. Since then, nearly 2,000 Tomahawks have been fired in anger against the Sudan, Afghanistan, the Balkans, Libya, Somalia and Yemen. The most recent strike was in 2017 against the Al-Shayrat air base in Syria—a response to chemical weapon attacks by the Assad regime.

Today, Tomahawk is used only by the U.S. Navy with a conventional warhead against tactical targets. Tomahawk Block III added GPS guidance, further improving accuracy. Block IV, the current version that is also known as Tactical Tomahawk, was introduced in 2004. Tactical Tomahawk adds a new two-way data link that allows mission commanders to observe damage at the target site and retask the missile to up to fifteen alternate targets. In addition, the missile can divert to an entirely different set of coordinates. The missile can also loiter over the target area, waiting for events to unfold and targeting plans to change.

The refocus of the U.S. Navy on great-power warfare has the service mulling new upgrades designed to make the missile effective against ships. The Navy is developing an upgrade for Block IV missiles, known as Maritime Strike Tomahawk (MST), which will give it the ability to attack enemy ships at ranges of up to 1,000 miles—far greater than the range of the existing Harpoon missile. MST will likely use a combination of active and passive sensors to home in on enemy fleets, and be capable of operating in GPS-denied environments. Since it is a modification of an existing missile, Maritime Strike Tomahawk will be cheaper, easier to maintain and have a shorter development cycle.

The Tomahawk missile has been a highly successful platform in large part due to its adaptability. From submarines to battleships to tractor trailers, the Tomahawk has been based on a wide variety of platforms and outfitted for a wide variety of missions. Despite a new focus on hypersonic weapons there is still room for a clever subsonic missile, perhaps someday aided by artificial intelligence. Already four decades old, Tomahawk may well be around another three decades, changing with the times and to incorporate the latest technology.