The TPP May Not Be Completely Dead Yet 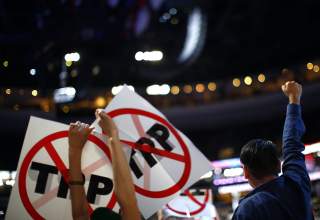 Will the work that went into negotiating the Trans-Pacific Partnership (TPP) go to waste? There are two approaches the remaining members can take. Useful parts of the TPP can be uplifted and transplanted into other agreements. Or the trade agreement can be seen as a sleeping beauty — or better yet, a modern woman who needs no prince but who will wake up and get on with it.

The TPP cannot be revived as drafted. The agreement cannot come into force unless ratified within two years by economies that constitute 85 per cent of the total GDP of the 12 members. This makes ratification by the United States and Japan indispensable. While President Trump is not noted for consistency of purpose, the prospect that he will not only reverse his stance on the TPP but also secure Congressional approval within two years is surely nil.

Revival of the TPP therefore depends on the 11 other members — that includes Australia, Brunei, Canada, Chile, Japan, Malaysia, Mexico, New Zealand, Peru, Singapore and Vietnam — agreeing to revise the ratification clause and approve an amended agreement. Japan and New Zealand, with some support from Australia, have advocated that approach.

Economic modelling suggests that a TPP-11 would benefit participants, although the amount of welfare gained varies among countries. Reducing barriers to sharing resources usually produces gains and so the result is not surprising. Nor is it powerful. Each participant has to look at who in its community gains and who loses by implementing the trade agreement and ask whether the political battle for ratification is worthwhile. Governments that ‘sold’ the TPP on the basis of access to the US market, such as Vietnam and Malaysia, are especially challenged.

Every participant is now likely to look at the agreement and say there are parts they accepted only because they were tolerable in return for access to the US market or other US concessions. The temptation to seek modification is high. But in doing so, the 11 members would nominate different clauses and face another lengthy set of negotiations. Is the cost of such renegotiation worthwhile? The group of 11 is not an obviously attractive unit and it is very likely that the negotiating resources would be better deployed elsewhere.

In any case, one of the attractions of a TPP-11 is the prospect that at some stage, the United States might be attracted back to participation. Congressional attitudes have to change for the existing draft TPP to have any chance of ratification, and US adherence to an agreement shorn of some US negotiating points is even less likely. Hence those governments advocating proceeding with a TPP-11 are also advocating that it should be with the existing text.

Swallowing US demands without gaining anything in return is challenging.

But there is also a deeper issue. A year or so ago, Japan appeared to be evolving a strategy in which it saw its future as one of the leaders of the Asian economy, using technology to solve the problems of an ageing and declining population. Under this vision, it would collaborate with China and other Asian economies to provide leadership for global growth. But more recently, the US alliance has returned to salience, and the stance of the Japanese government has become markedly more skeptical of China. Influential figures in Japan seem to regard the TPP as setting ‘standards’ out of China’s reach for a long time into the future. For them, the TPP is a way of ‘containing’ Beijing.

The TPP never made a great deal of economic sense except as a trans-Pacific institution that would eventually include China as well as the US. The original ‘Pacific 4’— Brunei, Chile, New Zealand and Singapore — came together in a desire to strengthen trans-Pacific institutions. APEC Leaders characterised the TPP as one of a number of paths to a Free Trade Area of the Asia Pacific. A TPP envisaged in any other way is not attractive.

In short, the TPP does not look like a sleeping beauty. While the rhetoric of ‘high standards’ owed much more to political salesmanship than rigorous analysis, there are parts of the agreement that can facilitate economic progress. We might farewell some of the provisions about rules of origin or intellectual property without regret, but the approach to domestic institution building while participating collaboratively in shared objectives is attractive.

The existing text needs creative adaptation rather than simple adoption. Any successor agreement should be between those members who wish to exploit the gains of well-managed globalisation for innovative, inclusive and sustainable growth. The TPP can be a valuable organ donor.