The Trillion-Dollar Question: Will the War on Terror Ever End? 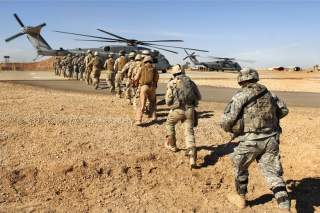 Last night, Director of Central Intelligence John Brennan participated in a question-and-answer session at Harvard Kennedy School’s Institute of Politics. The first thirty-seven minutes consisted of an unusually probing exchange between Brennan and Harvard professor Graham Allison (full disclosure: Graham is a former boss of mine). Most notably, between 19:07 and 29:25 in the video, Allison pressed Brennan repeatedly about whether the United States is winning the war on terrorism and why the number of al-Qaeda-affiliated groups has only increased since 9/11: “There seem to be more of them than when we started…How are we doing?”

If I look across the board in terms of since 9/11 at terrorist organizations, and if the United States in all of its various forms. In intelligence, military, homeland security, law enforcement, diplomacy. If we were not as engaged against the terrorists, I think we would be facing a horrendous, horrendous environment. Because they would have taken full advantage of the opportunities that they have had across the region…

We have worked collectively as a government but also with our international partners very hard to try and root many of them out. Might some of these actions be stimulants to others joining their ranks? Sure, that’s a possibility. I think, though it has taken off of the battlefield a lot more terrorists, than it has put on.

This statement is impossible to evaluate or measure because the U.S. government has consistently refused to state publicly which terrorist organizations are deemed combatants, and can therefore be “taken out on the battlefield.” However, relying upon the State Department’s annual Country Reports on Terrorism,the estimated strength of all al-Qaeda-affiliated groups has grown or stayed the same since President Obama came into office.  Of course, non-al-Qaeda-affiliated groups have arisen since 9/11, including the self-proclaimed Islamic State, which the Central Intelligence Agency estimated last September to contain up to 31,500 fighters, and Boko Haram, which has perhaps 10,000 committed members.

However, the most interesting question posed to Brennan came at the very end from a Harvard freshman who identified himself as Julian: “We’ve been fighting the war on terror since 2001. Is there an end in sight, or should we get used to this new state of existence?

It’s a long war, unfortunately. But it’s been a war that has been in existence for millennia, at the same time—the use of violence for political purposes against noncombatants by either a state actor or a subnational group.

Terrorism has taken many forms over the years. What is more challenging now is, again, the technology that is available to terrorists, the great devastation that can be created by even a handful of folks, and also mass communication that just proliferates all of this activity and incitement and encouragement. So you have an environment now that’s very conducive to that type of propaganda and recruitment efforts, as well as the ability to get materials that are going to kill people. And so this is going to be something, I think, that we’re always going to have to be vigilant about. There is evil in the world and some people just want to kill for the sake of killing…This is something that, whether it’s from this group right now or another group, I think the ability to cause damage and violence and kill will be with us for many years to come.

We just have to not kill our way out of this because that’s not going to address it. We need to stop those attacks that are in train but we also have to address some of those underlying factors and conditions. I’m not saying that poverty causes somebody to become a terrorist, or a lack of governance, but they certainly do allow these terrorist organizations to grow and they take full advantage of those opportunities.

To summarize, the war on terrorism is working, compared to inaction or other policies. But, the American people should expect it to continue for millennia, or as long as lethal technologies and mass communication remain available to evil people.