The Trump Administration Wants Another Littoral Combat Ship (And More) 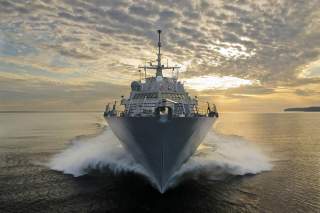 The Trump Administration has submitted revisions to its fiscal year budget submissions to the U.S. Congress that revises some key U.S. Navy procurements.

Under the revised request, the Pentagon would seek to cancel the Block I version of the Boeing F/A-18E/F Super Hornet’s Infrared Search and Track (IRST) air-to-air sensor in favor of adopting the Block II variant. The Navy will also receive another Littoral Combat Ship (LCS) under the revised budget submission.

The IRST program would be trimmed by about $100 million, which would then be shifted into the Navy’s shipbuilding accounts for the LCS as part of the revisions.

“This amendment would reduce funding for the F/A-18 Infrared Search and Track (IRST) system by $100 million. This requested reduction would partially offset a corresponding increase to the Shipbuilding and Conversion, Navy account in order to provide for an additional Littoral Combat Ship in FY 2018,” the amended budget submission reads. “The offset is available due to the cancellation of the procurement for the Block I FA/18-IRST, which provides a limited capability compared to the more advanced Block II variant. The Navy will equip the full number of F/A-18s with the Block II IRST on the same schedule as currently planned.”

The IRST capability is a key feature of the Navy’s Block III Super Hornet and provides the service with a “counter-stealth” air-to-air capability. The IRST sensor—which cannot be jammed in an electronic warfare heavy environment—uses long-wave infrared to detect aerial targets at extended ranges.

However, the performance of infrared sensors is highly dependent on the weather. For example, clouds and moisture in the atmosphere impose serious limitations on system performance and infrared sensors generally unable to accurately gauge aerial target ranges. In order the overcome those limitations, the Block III Super Hornet would have to network multiple aircraft in a flight to accurately measure ranges and generate a weapons quality track. However, as one industry official told me, in the case of a single-ship, the aircraft could use a series of snaking turns to determine range to target.

Meanwhile, the Trump Administration wants another LCS—with $100 million coming from the Block I IRST program. “This amendment would increase funding for the Shipbuilding and Conversion, Navy account by nearly $500 million to provide for an additional Littoral Combat Ship (LCS) in FY 2018, for a total of two ships,” the amendment reads. “This increase is fully offset by proposed reductions described in accompanying amendments to three Navy accounts: Aircraft Procurement; Other Procurement; and Research, Development, Test and Evaluation. This rate of shipbuilding is necessary to sustain the industrial base to preserve competition for the Frigate program and grow the fleet to meet operational requirements that exceed the capacity of today's fleet.”

The amended budget submission does not say which version of the LCS the Navy wants—but presumably the service will buys one each of the Freedom and Independence class ships.