The Truth About an ‘Older’ U.S. Air Force Fleet 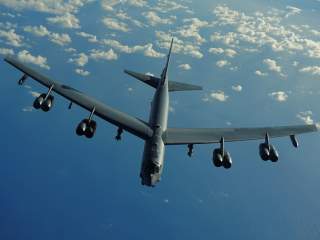 In Air Force Times this week, Jeff Schogol pulled some descriptive statistics from USAF records to report on “which aircraft are most mission-ready”. His list included the various types of attack, bomber, cargo (including gunship and electronic warfare), fighter, rescue helicopter, tilt-rotor, tanker, and drone aircraft currently flying in the Middle East. Mission-capable rates—the percentage of time that an airplane possibly needed for a mission actually was ready for a mission—varied over the past year from 92 percent for the MQ-1B Predator down to 47 percent for the B-1B Lancer. What the table didn’t show was how those rates related to his other two descriptors: the size of the USAF’s fleet of that aircraft type, and the average age of the aircraft in that fleet. A common refrain holds that having more of any single type of aircraft makes maintenance more scale-efficient, and that newer aircraft are easier to maintain than older aircraft. Ceteris paribus, both are almost unassailably true. For the USAF, however, neither relationship is actually putting rubber on the ramp.

I thought that the graphic artist’s straightforward table could be usefully made into something more analytically revealing, so I built a bubble chart of fleet sizes atop a scatter plot of fleet readiness versus average aircraft age. In the embedded figure, the bubbles and the attached numbers represent how many of each aircraft type the USAF has in its fleet. (To match the numbers to the aircraft type, see Schogol’s article.) The chart further displays the average age of that fleet on the horizontal axis, and the mission-capable rate throughout 2015 on the vertical axis. In this analysis, I thus take fleet age and fleet size as independent variables that could logically affect the dependent variable of fleet mission-capable rate. That seems reasonable. 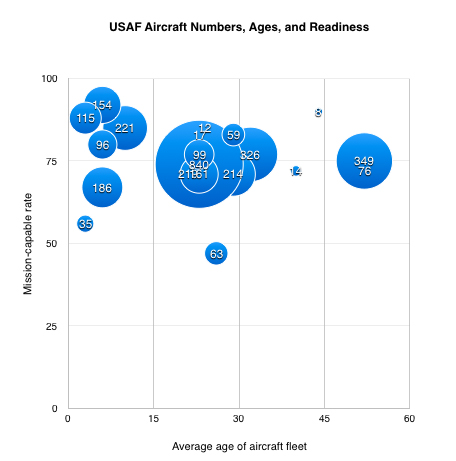 The figure, however, doesn’t seem to suggest that either age or quantity leads to readiness. Those seventy-six B-52Hs have a readiness rate of 72 percent, but they average fifty-two years old. Conversely, the far newer F-22s and CV-22s are much less available, at 67 and 56 percent. The overall statistics actually say less: no regression—linear, logarithmic, polynomial, power or exponential—of readiness on these two factors produces a correlation coefficient above two percent. The interrelationship of the two dependent factors also doesn’t seem meaningful: regressing on the log of the product (call that airframe-years) produces roughly the same low coefficient.

That lack of results doesn’t mean that fleet age and size are unimportant. It’s entirely possible that the USAF is throwing maintainers and money at those Predators, and similarly ready Reapers, on which Central Command so heavily relies. But at a certain point, all that effort hits limits in the art of the possible. The swing-wing, supersonic B-1B is just a much more mechanically complicated aircraft than the B-52H. Fairly, those -52s aren’t really 52 years old, as their wings, engines, tails, fuselages and landing gear have all been replaced or rebuilt. But just as fundamentally, the older plane’s maintainability “comes from the original engineering and simplistic design.” As Schogol quoted Lieutenant Colonel Todd Andre, the division chief for aircraft maintenance at Bomber (er, Global Strike) Command, “most of the subsystems are based on 1970s technology.” In contrast to the F-22A, we know for sure that they don’t have millions of lines of code to troubleshoot and delicate composite skins to patch.

So when you hear that the USAF’s fleet is older than it has been in decades, don’t immediately lament its material condition. Excepting the drones from General Atomics, it's the newer aircraft that are harder to maintain. As I heard an USAF general say some months ago, the maintenance costs of those stealth aircraft are eating his lunch. I’m not sure that’s progress, but I know that it may soon be deleterious to the Air Force’s finances.

James Hasik is a senior fellow at the Brent Scowcroft Center on International Security. This article first appeared in the Defense Industrialist.