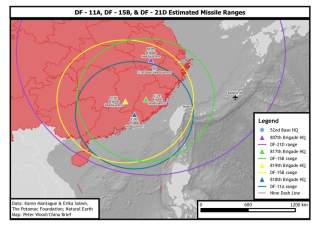 China’s military is reorganizing itself to be a more modern, effective force. On January 1, 2016, the Second Artillery Force (第二炮兵部队) (responsible for China’s nuclear and conventional ballistic missile arsenals) was reorganized into the People’s Liberation Army Rocket Force (PLARF; 火箭部队), elevating it to a service (军种) fully on-par with the Navy, Army and Air Force (Sina, January 1). As China streamlines its military and works to improve the quality of its personnel, several cutting edge projects are in the works to provide the People’s Liberation Army with advanced weapons. One of these is the PRC’s hypersonic glide vehicle (HGV), called the DF-ZF in China and designated by U.S. defense officials as the Wu-14. The development and testing of this new class of hypersonic weaponry in China has been extremely secretive. However, its eventual operational deployment will represent a significant improvement in the PLARF’s conventional and nuclear arsenals, as it has the potential to penetrate even the strongest layered anti-missile defenses of the United States and its allies.

In addition to China, the United States and Russia are pursuing various iterations of HGVs and all three have developed prototypes of this high-tech weapon. The X-51A, Yu-71, and DF-ZF are the current HGV prototypes for the U.S., Russia and China, respectively. This new class of weapons has prompted each nation to adopt different approaches, with each model using a different engine, fuel type, and delivery method, but all HGV weapons’ core characteristic is sustained and controlled Mach 5 (3,836 mph) flight.

The variation in each country’s testing of their respective HGVs provides a glimpse into their motives for pursuing this costly technology. It is speculated that the United States hopes to improve the speed of its Prompt Global Strike capability (which would enable to hit a target anywhere in the world with a conventional warhead in less than an hour), while both Russia and the PRC want the ability to pierce U.S. missile defenses. The competition between the three countries is resulting in both a new arms race fueled by ambiguous goals and a lack of transparency on all sides.

To understand China’s progress toward an operational HGV, an examination of the U.S. military’s hypersonic projects is important. The United States has been researching and developing hypersonic technology since the early 2000s under the Defense Advanced Research Projects Agency’s (DARPA) Force Application and Launch from Continental United States (FALCON) Project. Since then, the U.S. Air Force, DARPA, Boeing, and many others have collaborated on the X-51A Waverider HGV. The Waverider uses a B-52 bomber as a launch platform, is intended to be capable of Mach 5+ speeds, and is equipped with a scramjet engine that uses high speed to pressurize the air-to-fuel mixture, allowing more efficient combustion and greater speeds. The first Waverider test took place on May 26, 2010, and set a record with a 200-second burn, beating out the 12-second burn of NASA’s X-43 in 2004 (Edwards Air Force Base News, May 26, 2010). In contrast, Chinese media reports that its military has the capability to launch its HGV from a variety of types of ballistic missile models. Among these are the DF-11B, DF-15B, DF-15C, DF-16, DF-21C, DF-21D, DF-26 (rumored), and the M-20/DF-12 (Sina Military, June 18, 2015). When comparing HGV technology, the U.S.’s delivery method and intended range appear to be more ambitious. However, the U.S. program has had a much lower test launch success rate (25 percent), compared to China’s 83 percent. Despite its recent advances with its HGV program, the United States has not conducted a Waverider test in the past two years, which makes the Chinese program appear more advanced.

China and its Goals for the DF-ZF

China has conducted six DF-ZF tests in the past year and a half. Although frequency does not determine test quality, it does demonstrate that China is dedicated to the successful development of this technology. Its 10th Research Institute (also known as the “Near Space Flight Vehicle Research Institute”), which is under the China Aerospace Science Industry Corporation (CASIC) 1st Academy, is the sole entity responsible for the development of HGVs. This unique concentration of the entirety of the program into the 10th Research Institute seems to have facilitated a remarkably quick development of China’s DF-ZF. Unlike the United States, China is assumed to be using a medium-range ballistic missile (MRBM) transporter erector launcher (TEL) as the delivery method for all of its HGV tests. This design launches the boost-glide vehicle into the atmosphere along a trajectory similar to a traditional ballistic missile. After the vehicle reenters the earth’s atmosphere, it boosts itself back into the upper atmosphere. It then performs a pull up maneuver to control speed and altitude before gliding into its target (Next Big Future, August 1, 2015). The up-and-down trajectory of the HGV is believed to be able to confuse current ballistic missile defense (BMD) systems as the projectile’s erratic course prevents the system from locking onto its target. Countries in East Asia with BMD available to intercept a Chinese HGV include Japan, South Korea and Taiwan, each with U.S.-supplied PATRIOT-3 (PAC-3) batteries, along with India, Pakistan and Russia, each of whom has its own indigenous BMD, as well as BMD purchased from other countries. The DF-ZF’s unpredictable flight path and ability to be launched from a variety of missiles, each with different range capabilities, shows that China’s goals for its HGV is to evade ballistic missile defense systems that threaten its ability to launch a successful offensive or defensive strike.

A major concern about China’s HGV program is that the technology could be applied to both conventional and nuclear weapons. The wreckage of China’s second (and failed) HGV test indicates that it was conducted using a liquid-fueled launch platform. This test contradicts the many reports that China is using the DF-21 solid-fueled rocket as a launch platform. However, it warrants special attention because it is the only one that has public images of its components (Arms Control Wonk, September 3, 2014). This is important because liquid-fueled launchers are associated with China’s nuclear program. The use of a liquid-fueled launch platform such as the Long March-4C (speculated to be used in the second test) indicates that China may be developing the DF-ZF for both conventional and nuclear use. An alternative explanation for the use of liquid fuel could be to compensate for the weight of the glider during acceleration to hypersonic speed. However, this explanation likely complements—rather than displaces—the theory behind intended nuclear use (Carnegie Endowment, November 21, 2014).

China’s primary goal for the HGV is to have it travel fast enough while making use of the HGV’s unique flight characteristics to evade BMD systems. China has expressed its frustration with deployed U.S. BMD in the Western Pacific for over a decade due to the perception that such a system would degrade China’s limited nuclear deterrent (MOD, May 26, 2015; MOD, December 9, 2011). Further adding to China’s unease, other regional powers such as Japan and South Korea have also invested heavily in ballistic missile defense, making any sort of larger-scale engagement in the region quite challenging for China’s missile forces (CRS, April 3, 2015). Most of China’s HGV tests have attempted to travel distances up to 1,750 kilometers (1,087 miles) and have been launched from Taiyuan Satellite Launch Center, located in Shanxi province (China Military Online, December 12, 2014). The intended distance of these tests is a strong indicator that China is either less advanced in its HGV development than the United States or is focused on addressing regional threats. If China successfully designs an operational short-range HGV, it will have a better chance of delivering successful missile strikes against its regional adversaries. Given China’s strategic focus on regional security issues—particularly on developing the ability to defeat Taiwan militarily—a shorter-range HGV addresses China’s more immediate needs.

Since the Taiyuan launch center is used primarily for testing new missiles, once development of the DF-ZF is complete, it likely will be relocated to PLARF bases that house compatible launchers. Because China’s DF-ZF appears to be regionally focused, there is a strong possibility that it would be placed under the jurisdiction of the 52nd Base command. The 52nd Base command covers a majority of the Eastern coast of China and it is likely that the DF-ZF will be placed directly in the 807th brigade headquarters, the 817th brigade headquarters, the 818th brigade headquarters, the 819th brigade headquarters, and/or any PLARF bases that house the HGV compatible DF-11A, DF-15B, and DF-21D. There are also specific locations under Base 53’s command on the southeast coast of China, which could also be strategic for the use of a DF-ZF in a regional strike (AusAirpower.net, January 27, 2014). The DF-11A and DF-15B are able to reach Taiwan, while the DF-21 is able to reach Taiwan, the Philippines, southern Japan, South Korea and North Korea. (See Image 1) Furthermore, it is reported that a glide vehicle extends the weapon’s range by 500–1,000 kilometers, but it is unclear if this distance is accounted for in the Chinese tests or choices of launch vehicles (Tencent News, November 27, 2015). If the additional distance was not accounted for in published distances, the HGV could have the ability to cover even the farthest parts of the South China Sea and potentially the Second Island Chain, which includes Guam.