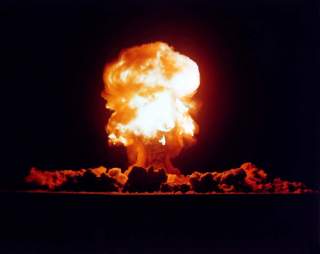 If the framework announced in Switzerland on April 2 regarding Iran's nuclear program and detailed in a US State Department Fact Sheet is successfully carried forward to an agreed Plan of Action (due to be concluded by June 30), it will be a major achievement.

But it should not be seen as the end of the process. It is a definitive step, but it will need to be followed by a number of concrete actions before we can consider that the Iranian nuclear problem has been resolved.

If the deal is agreed in June, and if it is faithfully implemented, it will give all parties – Iran, its neighbors, and the wider international community – 15 years of breathing space. It is essential to use this time effectively to ensure the deal doesn't just kick the can down the road. During this period decisions need to be made by Iran and others to ensure that the Middle East does not end up in a South Asia-style nuclear arms race.

It is by no means a forgone conclusion that Iran wants nuclear weapons, though Iran no doubt believes that having the capability to produce nuclear weapons within a relatively short time – what is termed nuclear hedging – has major strategic value. It is essential to ensure that the consequences for crossing the threshold remain high enough to deter Iran from doing so. This will require the US to keep a high level of engagement in Middle East affairs for the foreseeable future.

But having Iran maintain “just” a hedging posture cannot be considered a good outcome – we have already seen some of Iran's neighbors wanting to develop nuclear programs that will give them a similar capability. A situation of strategic competition in nuclear capability will be destabilizing for the Middle East.

With the problem of hedging in mind, an objective earlier in these negotiations was to establish the principle that Iran's uranium enrichment capability should be directly linked to its demonstrated nuclear fuel needs. In current circumstances these needs are zero, because Russia is willing to supply fuel for the lifetime of Iran's only power reactor, at Bushehr. For the future, Iran says it plans a number of reactors, both imported (Russia has agreed to build eight, and would supply the fuel) and indigenous.

But there is a dilemma in pushing the capability-not-exceeding-needs argument: the scale of any power generation need is much greater than Iran's existing capability. Enrichment capability is measured in separative work units (SWU). Currently Iran has installed enrichment centrifuges totaling around 20,000 SWU, and is operating centrifuges totaling around 8000 SWU. Iran's main enrichment facility, at Natanz, has room for 50,000 centrifuges – between 40,000 SWU (based on Iran's first generation centrifuges) and perhaps 250,000 SWU if using more advanced models. This compares with the capacity required to produce the annual fuel requirements for just one Bushehr-size reactor, around 120,000 SWU (and three times this to produce the initial fuel load). Only 5000 SWU are required to produce sufficient HEU (highly enriched uranium) for one nuclear weapon.

So, the scale of a “legitimate” enrichment program easily dwarfs Iran's current program. This could be why the capacity/needs principle was dropped from the negotiations. But it is an important principle, and it should never be accepted that nuclear hedging is a legitimate purpose under the Nuclear Non-Proliferation Treaty for a “peaceful” nuclear program. The last thing anyone – including Iran – would want is a proliferation of enrichment or reprocessing programs. It is essential for the international community to use the 15-year breathing space to address this problem of nuclear hedging.

In this regard the most useful action would be to establish a system of international nuclear fuel supply guarantees so no country can claim it needs an enrichment program to ensure security of supply. Where new enrichment (or reprocessing) programs do proceed, these should not be national programs but controlled on a regional or international basis. Convincing alternatives are needed to show Iran and other prospective newcomers that they have no legitimate reason for pursuing a national program in proliferation-sensitive technologies.

Another essential project to pursue during the breathing space is a Middle East WMD-free zone. Iran must be persuaded that the best way of ensuring its long-term national security is not through nuclear capability but through the establishment of such a zone, a point recently made by Saudi Arabia. If Iran pursues nuclear weapons, or a stronger hedging posture, its current advantage will erode over time as others pursue the same. Eventually Iran will find itself with nuclear-armed or nuclear-capable neighbors, and its strategic circumstances will be substantially worse than anything it can imagine today.

The same challenge confronts Israel. If others in the region become nuclear armed or even just nuclear capable, the strategic advantage Israel now enjoys will disappear. It would be very risky to rely on nuclear deterrence in these circumstances. For Israel as well as Iran, a WMD-free zone offers the best long-term future. This means that eventually Israel will have to divest itself of nuclear weapons. This may seem unthinkable today, but a future where others in the region also have nuclear weapons is even more unthinkable. Others in the region must be realistic; Israel cannot be expected to disarm as a pre-condition for a WMD-free zone. But Israel must be prepared to think in terms of a phased approach, disarming in stages as a WMD-free zone is established and is shown to be effective.

The Iran deal may present a 15-year breathing space, but the negotiating parties (the P5+1) cannot afford to rest on their laurels. To resolve the challenges discussed here will require a program of work every bit as intensive as over the past several years.