The United States Has Military Options to Deal with North Korea 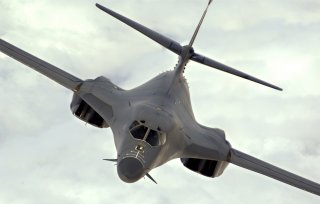 The United States has military options to deal with North Korea and its nuclear arsenal, according to the Pentagon’s top official.

While U.S. Secretary of Defense James Mattis would not say what might prompt the United States to take military action against Pyongyang, he is adamant that Washington does have the means to eliminate the North Korean threat.

“Do I have military options? Of course I do,” Mattis told reporters enroute to Seattle onboard a military aircraft on Aug. 10.

“That's my responsibility, to have those. And we work very closely with allies to ensure that this is not unilateral either—this is a multilateral military option that we have. And of course there's a military solution.”

Mattis made it clear, however, that military force is not his preferred option. Rather, the Mattis would like to see diplomacy prevail.

Indeed, asked if people on Guam—which Pyongyang threatened to strike preemptively—should be worried by the North Korean threat, Mattis flatly answered: “No.”

But Mattis would not elaborate on any near term readiness enhancement measures the Pentagon has undertaken for America’s nuclear forces and missile defenses.

“I don't think I want to tell the adversary what we've done,” Mattis said.

“Yeah, I had to think my way through it. I think it's a very good -- it’s a very legitimate question. I think also you're aware that we are reviewing our nuclear posture right now. Obviously, we're reviewing our ballistic missile defense...There are any number of things underway, but I don't want to get into the specifics.”

“I won't speculate on that,” Mattis said.

“The DPRK (Democratic People’s Republic of Korea)–regime deck will continue to be grossly overmatched by ours, OK, and would lose any arms race or conflict it initiates.”

Mattis also did not directly comment on the President Donald Trump’s ‘Fire and Fury’ rhetoric.

“The rhetoric is up to the President,” Mattis said.

“The President is—I was not elected. The American people elected the President.  And he—I think what he's pointing out is simply that these provocations—you can see his diplomatic effort to try and stop it. And he's just showing the concern he has, that is shared, obviously, globally, when you see that kind of unanimous Security Council result. That's what he's conveying.”