The U.S. Air Force Is Flexing Its Muscles (Think F-15s) Over the Baltics 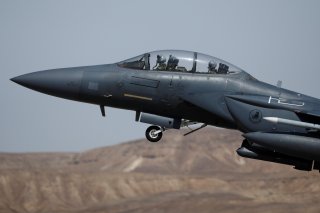 The United States Air Force has deployed seven Boeing F-15C Eagle air superiority fighters from the 493rd Fighter Squadron to Lithuania as the service assumes control of NATO’s Baltic air policing mission. The U.S. Air Force is taking over the duty from the Polish air force for the next 120 days as part of a regular NATO rotation to patrol the skies over Latvia, Lithuania and Estonia—all of which were once constituent republics of the Soviet Union before its 1991 collapse.

"I'm excited as a NATO air chief and I'm excited as a U.S. citizen to welcome the 493rd from the 48th Fighter Wing, an F-15C squadron, to serve the next rotation of Baltic air policing," Air Force Gen. Tod D. Wolters, commander of NATO Allied Air Command and U.S. Air Forces in Europe said.

"It is the U.S.'s fifth opportunity to rotate and serve the region, and I know that all of our maintainers, operators, mission supporters and that beautiful F-15C will do whatever it takes over the next 120 days to protect the beautiful sovereign skies above Lithuania."

For its part of the NATO mission, the U.S. Air Force has deployed seven F-15Cs and 140 airmen as part of the 493rd Expeditionary Fighter Squadron from the 48th Fighter Wing at Royal Air Force Lakenheath in England.

"I speak on behalf of every U.S. airman here, when I say that it is our honor to protect and defend the sovereignty of the Baltic borders," Lt. Col. Cody Blake, the 493rd EFS detachment commander, said.

The U.S. Air Force deployment comes shortly before neighboring Russia and Belarus launch their periodic Zapad-2017 (or West-2017) wargames next month during Sept. 14-20. The massive Russian-Belarusian wargames are expected to involve roughly 5,500 Russian and 7,200 Belarusian troops, about 70 aircraft, 250 tanks and 200 artillery systems and 10 ships.

Though the Zapad wargames are a periodic exercise, the Russian military maneuvers are a source of concern for the three Baltic republics, which were forcibly reincorporated into the Soviet Union after the Second World War. They were independent following the 1917 Bolshevik Revolution, which toppled the Russian Empire. Poland—which was also once part of the Russian Empire and was then subsequently dominated by the Soviet Union during the Cold War—also has serious misgivings about the Zapad exercises.

The presence of the United States Air Force helps to reassure jittery NATO allies—particularly those bordering Russia—that the America will defend them if a conflict were ever to break out.

"We know that all of NATO stands alongside us in defense of our shared values and principles," Vytautas Umbrasas, Lithuania's vice defense minister, said.