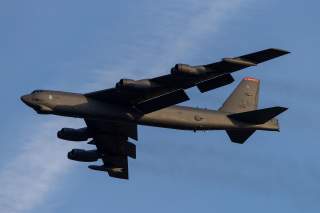 The technical structure and durability of the B-52 airframes in the Air Force fleet are described as extremely robust and able to keep flying well into the 2040s and beyond – so the service is taking steps to ensure the platform stays viable by receiving the most current and effective avionics, weapons and technologies.

The integration of air-to-air weapons on the B-52 does not seem inconceivable given the weapons upgrades already underway with the aircraft.  Air Force is also making progress with a technology-inspired effort to increase the weapons payload for the workhorse bomber, Eric Single, Chief of the Global Strike Division, Acquisition, told Scout Warrior in an interview last year.

B-52s have previously been able to carry JDAM weapons externally, but with the IWBU the aircraft will be able to internally house some of the most cutting edge precision-guided Joint Direct Attack Munitions and Joint Air-to-Surface Standoff Missiles, among others.