The U.S. Air Force Is Moving Forward on a New Air Force One 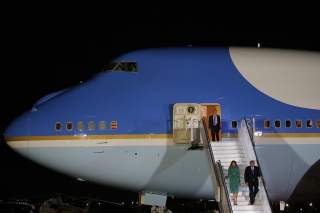 The United States Air Force has awarded Boeing a contract modification for slightly less than $600 million to start work on a new presidential transport aircraft.

"Following the award of the contract to purchase two commercial 747-8 aircraft, this contract award is the next major step forward toward ensuring an overall affordable program," Maj. Gen. Duke Richardson, the Presidential Airlift Recapitalization (PAR) program executive officer, said in a statement issued by the Air Force.

Under the terms of the Sept. 12, 2017, contract modification, Boeing will start work on designs to incorporate a mission communication system, electrical power upgrades, a medical facility, an executive interior, a self-defense system and autonomous ground operations capabilities into the two commercial 747-8s.

As ordered by President Donald Trump, the Air Force is working to reduce the cost of the replacement Air Force One as much as it can, but it might not quite match the White House’s boasts about cutting the price of the aircraft by more than $1 billion.

“Those opportunities identified will be reviewed to ensure mission capabilities are not degraded. The entire preliminary design effort will keep a focus on affordability.”

The current phase of the Air Force One replacement program is focused on finalizing the design of the aircraft without compromising on the its essential features.

“Under this contract action, Boeing and their suppliers will complete the initial design of the future Air Force One,” the Air Force statement reads.

“The Air Force is committed to working with Boeing to ensure the PAR program meets presidential airlift mission requirements, as well as the President's affordability expectations.”

After the design work is complete, the Air Force will issue another contract to build and test the new executive transports.

“The EMD contract modification is planned to award in Summer 2018. These aircraft will provide the President of the United States with safe, reliable, and affordable air transportation equipped with all mission capabilities necessary to continuously execute the constitutional responsibilities of Commander-in-Chief, Head of State, and Chief Executive.”

The last sentence of the Air Force statement is the key—while VC-25A looks like a normal airliner, it has to have all of the capabilities of a flying White House. As such, because of the all of the various mission systems onboard, Air Force One costs many times as much as a standard airliner.