The U.S. Air Force Is Starving Its A-10 Squadrons—Again 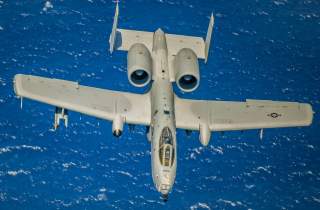 Since February 2016 the U.S. Air Force has been trumpeting that it has ended—or at least paused—its extended campaign against the A-10 and the close air support mission. “As a mission, we’re fully committed to close air support,” Air Force Chief of Staff Gen. Dave Goldfein assured reporters at a press conference.

But as first reported by Travis Tritten at the Washington Examiner, Rep. Martha McSally (R-AZ) spotted in written testimony that the Air Force was only committed to maintaining six active A-10 squadrons out to 2030—three less than the nine active squadrons in service today.

Not only is this commitment not “fully committed to close air support,” it’s also in direct contradiction of requirements in the National Defense Authorization Act, which specifies that the Air Force can’t spend any money to retire any of the current A-10s in the inventory and must maintain 171 A-10s in combat-coded status.

“The A-10s are now—as you know—in the DMZ, in South Korea, they’re kicking butt against ISIS, they’re deploying with the European reassurance initiative,” McSally said.

Given the demand for the A-10s, she questioned why the Air Force thought they could afford to lose that capability. Sources have told the Project On Government Oversight that deployed A-10 pilots, including those fighting against Islamic State, have been flying an average of 2,000 hours per year—over six times the peacetime average of 300 hours per year used as a basis for budgeting.

“I’d really like to know what those planning assumptions are of the six squadrons,” McSally said.

The Air Force included a $103 million request to fund new wings to keep the A-10s flying in its “unfunded priorities” list rather than fund the program as part of the regular budget. Air Force leaders aren’t opposed to upgrading older aircraft per se, they are just particular about which ones apparently. They included $257 million to upgrade F-16s into their regular budget request.

Attempting to understand Air Force thinking on this matter is difficult. The A-10 remains the workhorse of the tactical fleet. Pilots already have to fly too few airplanes for too long to be safe and effective—each sortie is averaging seven hours. This problem will only be compounded should the number of available A-10s decrease.

Air Force leaders created the re-winging budget crunch by allowing a previous Boeing contract for upgrading the A-10s to lapse. The Air Force’s earlier position had been that the CAS mission now being performed by the A-10s would in the future be done by the F-35. But testing revealed the F-35 isn’t up to the task.

“The mission capability of the A-10 will not be replaced by the F-35,” former Air Force Chief of Staff Mark Welsh admitted last year.

The latest testing report from the Director of Operational Test and Evaluation only further underscores the point by finding the F-35 in its current configuration “does not yet demonstrate CAS capabilities equivalent to those of fourth generation aircraft.”

Faults with the helmet display, testing revealed, made the Joint Strike Fighter not usable for combat, “and potentially unsafe to complete the planned testing.”

Close air support can often mean an edge on the battleground for our troops on the ground. It can also mean the difference between life and death for them should the enemy gain the advantage. This is why Congress has repeatedly pushed back against the Air Force’s misguided plans to retire A-10s before there is a proven replacement.

But the Air Force’s disdain for the A-10 is not to be underestimated. Air Force leaders continue to undermine the A-10’s readiness anyway. Recent Air Force efforts include cutting funding, moving more A-10s to “mothball” status, and depriving squadrons of the maintainers necessary to ensure combat effectiveness. Headquarters has also fought other needed upgrades.

We hope Congress will continue to consider the pressing needs of our ground forces by protecting real close air support capability and providing the funding necessary to keep the A-10s flying. The Save the A-10 Community has put together a sample form letter for those who would like to encourage their members of Congress directly.

This first appeared at the Project On Government Oversight here.